Kabul, widows' capital of the world

While Western-style shopping malls, bars and French restaurants are opening their doors for foreign aid workers and wealthy Afghan expatriates, the hidden face of modern Kabul as the widows' capital of the world is surfacing. 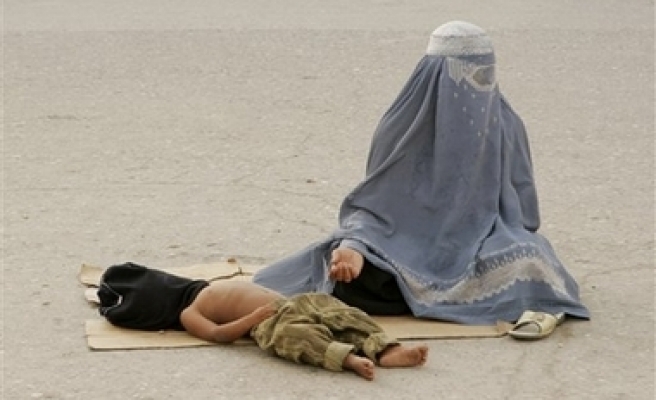 While Western-style shopping malls, bars and French restaurants are opening their doors for foreign aid workers and wealthy Afghan expatriates, the hidden face of modern Kabul as the widows' capital of the world is surfacing.

"If America invaded us to liberate our women, this is a clear sign that they are failing miserably," Maria Akrami, a social worker who runs a small NGO in Kabul, told The Independent on Thursday, May 17.

Across the capital, many women, mostly widows who lost their husbands in the civil war and the 2001 US invasion, are begging on the streets.

"I don't think our lives will improve," complained Seema, 16.

"My mother is a beggar, the government doesn't care about us. They do not offer to help us, nothing has changed for us in this new Afghanistan."

There are two million war widows in Afghanistan.

Invading the Asian country after the 9/11 attacks, Washington promised a rosy life and putting the Afghan people "on the path of progress".

Unemployment rates are hitting a towering 40 percent while many of Afghans are underemployed — working only a few hours a week or seasonally.

The country is still so destitute and undeveloped that most inhabitants have no central heating, electricity or running water.

Afghanistan has per-capital incomes of £125 a year, one of the lowest in the world.

Seema and her sister Zeba live in a simple one-room flat among the rubble and bombed-out buildings with no heating or water in a city where winter temperatures can plummet as low as minus 17C.

The girls, who lost their father in a US attack on their house in 2001, have lost hope of achieving their cherished dream of becoming teachers.

Their mother, Gul, leaves them every morning to go begging in the streets of the capital to eke out a living.

"The men hurl abuse at me, they make indecent gestures and I'm always being harassed, but at least they cannot see me."

There are as many as 50,000 Afghan women beggars in the streets of Kabul.

Many of them live in horrific conditions in the abandoned buildings in the suburbs, which receive electricity only a few hours every other night, assuming that they are wired at all.

Their plight is easy to forget in modern Kabul where Western-style shopping malls, bars and French restaurants are opening up for wealthy foreign aid workers and Afghan expatriates.

The Hamid Karzai's government offers no pensions or housing or any safety net for widows to fall back on.

"These women are uneducated; they lack basic job skills and cannot fend for themselves," said Akrami, the social worker.

"They should be the government's top priority."

In other Muslim countries, getting remarried can resolve the economic problems of widows.

But the situation is quite different in Afghanistan as most Afghan men do not want to bring up children from a previous marriage.

"They are fiercely protective of their wives and the mere thought of them being married before is an insult to their honor," said Akrami.

Womankind Worldwide, a UK-based women's rights group, said in a November report that abuses and discrimination are still widespread against women across Afghanistan.

It added that millions of women and girls still face systematic discrimination and violence in their local societies and households. Last Mod: 17 Mayıs 2007, 22:30
Add Comment