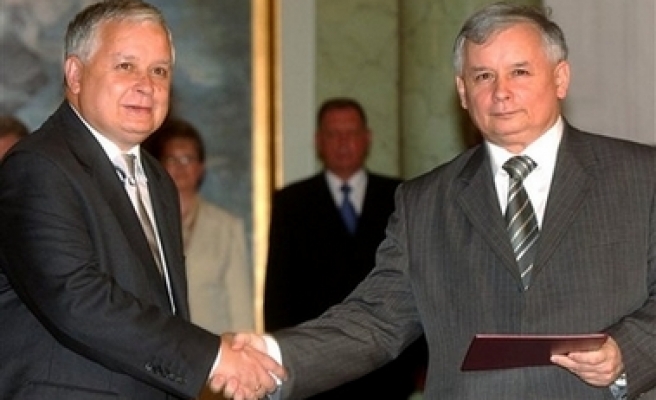 "Never, under no circumstances will we agree to what we have been proposed now and we feel the best solution for Europe is the square root system," Kaczynski told Polish Radio Tuesday.

Poland's objects to the co-called "double majority" system of voting written into the existing EU draft treaty and is pushing for changes in the form of a so-called "square root" system which it claims would give greater voting clout to the citizens of smaller EU member states.

Kaczynski, however, said he hoped the EU Brussels summit scheduled for June 21-22 would result in the opening of an inter-governmental conference focussed on completing work on the EU's future constitution.

Poland is coming under high pressure to drop its objection to the double majority voting system in the existing constitutional draft, thus allowing its rapid adoption.

On Monday in Warsaw Austrian Chancellor Alfred Gusenbauer invoked the idea of European solidarity to secure Poland's agreement to the existing version of the European Union's draft blanket constitution.

French President Nicolas Sarkozy is expected in the Polish capital Thursday, while Spanish Prime Minister Jose Luis Rodriguez Zapatero is due to visit Friday. Both are expected to bring a similar message to Warsaw.

The future constitution is considered a necessary reform, streamlining decision-making in the 27-member EU and preparing it for further eastward expansion.

But Kaczynski has insisted Poland was willing "to die" for changes to the voting system which would give more clout to the citizens of smaller EU member states.

A majority of EU states support the so-called double majority system of voting enshrined in the existing constitutional treaty.

According to the system, decisions in the 27 member bloc need the backing of at least 55 per cent of its members (at least 15 states), representing at least 65 per cent of the entire EU population.

The draft EU blanket constitution, shelved after French and Dutch voters rejected it in separate referenda in 2005, requires the unanimous approval of the EU's 27 members to come into effect.