Karadzic said that in 1996 Holbrooke had offered him immunity from the tribunal if he disappeared from public life inin the four-page filing released by the tribunal showed. 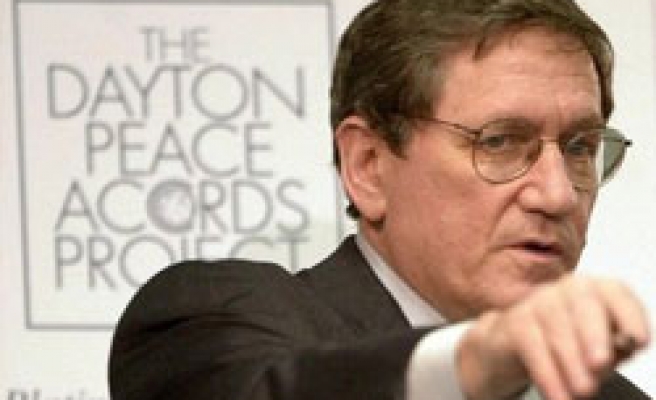 Former Bosnian Serb leader Radovan Karadzic demanded on Wednesday that former U.S. peace mediator Richard Holbrooke and ex-Secretary of State Madeleine Albright appear at the U.N. war crimes tribunal to back his claims of an immunity offer from the United States.

Karadzic, who was transferred to the Hague's International Criminal Tribunal for the Former Yugoslavia last week to face war crimes and genocide charges after 11 years on the run, challenged the legality of the case against him, a filing released by the tribunal showed.

In the document, Karadzic repeated his claims that in 1996 Holbrooke had offered him immunity from the tribunal if he disappeared from public life.

Karadzic argued that when Holbrooke realised he could not persuade the court's chief prosecutor to drop the indictment he decided to "liquidate" him instead.

He said several attempts had been made to locate and assassinate him, and that he feared "the long arm of Mr. Holbrooke or Mrs. Albright" could reach him even in jail.

"It is because of this and because of the fact that an agreement between the USA and me has been breached that I wish to challenge the legality of the proceedings in their entirety and as well as any individual step thereof," Karadzic said in the four-page filing, translated into English from Serbian.

A spokeswoman for the tribunal's Office of the Prosecutor did not say whether they would respond to the filing.

Holbrooke, who has repeated his denials of Karadzic's claims since the former Bosnian Serb leader appeared in court for the first time last week, was quoted by a German newspaper as calling the claims "an absurd and laughable lie that Karadzic has been spreading for years".

"It is no more than another lie from the most evil man in Europe," Holbrooke was quoted as saying in Wednesday's Bild.

After repeating many of his claims from a previous filing, Karadzic asked the tribunal to summon Holbrooke, Albright and several others, including former Chief Prosecutor Richard Goldstone, for questioning.

The demands were reminiscent of those made by former Serbian President Slobodan Milosevic, who died during his war crimes trial in 2006, for former British Prime Minister Tony Blair and U.S. President Bill Clinton to appear in court to testify.

Arrested in Belgrade with a flowing beard and long hair that disguised him while working as an alternative healer, Karadzic faces 11 charges of war crimes and crimes against humanity, including two of genocide over the 43-month siege of Sarajevo and the 1995 massacre of 8,000 Muslims at Srebrenica.
Last Mod: 08 Ağustos 2008, 00:10
Add Comment