"The war will be over when I see Bosnian Serb schoolchildren paying their respects to the massacre victims in Srebrenica," says a Bosnian. 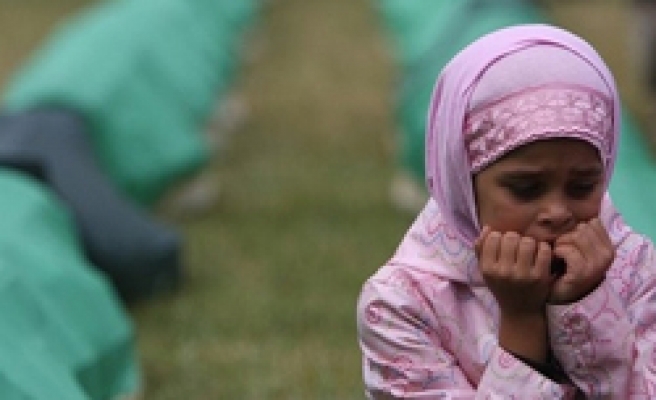 Genocide, siege and massacre are for many people in Bosnia more than just words on Radovan Karadzic's indictment. They represent years of suffering, dead friends and nightmares that will always haunt them.

"Karadzic took my life, he stole my youth, he stole everything," said Edna, a woman who was 19 when Bosnian Serbs started their 43-month siege of the Bosnian capital, Sarajevo.

Karadzic, the Bosnian Serb president during Bosnia's 1992-95 war, was taken to a United Nations war crimes tribunal in The Hague on Wednesday to face trial on two genocide charges. His lawyer says Karadzic is confident he can prove his "innocence".

Karadzic tried to take Sarajevo as part of a major plan to force Muslims and Croats from lands he wanted to link to Serbia.

Mortar bombs and grenades rained on Sarajevo daily, water and power were cut off, and people lived on scarce humanitarian aid. According to the latest figures, 14,300 people were killed in the siege, some shot by snipers while searching for food.

Edna, who declined to be identified by her full name, is handicapped. She was wounded by a shell two years into the war.

"There was a bridge you had to cross to go to get bread or water, our lifeline with the rest of the city," she said. "Each time one of us left home to get water or wood for heating, we parted as if it was the last time we'd see each other."

The war tore apart Bosnia's multicultural fabric, ethnicity and religion, cleaving through communities with a common language and many of the same customs. Hundreds of thousands of people became refugees, and blame Karadzic.

"Karadzic is responsible for making my family scatter throughout the world," said Slobodanka Dizdarevic, a Bosnian Serb who lived with her Muslim husband in Sarajevo.

The hatred that was unleashed was blamed on populist demagogues, historical reasons and old rivalries, but is still hard to understand for those who survived it.

Mina, a 75-year old Bosnian Muslim high school teacher, spent a year with her husband in the Grbavica neighbourhood, a part of Sarajevo where there were daily raids which could end in beatings and gang rapes.

"Bosnian Serb soldiers came every day, drunk, armed to the teeth. Each time they took something -- the car, the TV, whatever they liked," she said.

"We survived the summer of '92 on plums my husband picked at 4 a.m., when nobody could see. I made plum pies, plum jams. We ate plums for breakfast, lunch and dinner."

She remembers the humiliation she felt when she was forced to be part of a labour squad emptying garbage containers.

"My Serb neighbours taunted me and shouted 'Hey professor, you actually make a good cleaner!'," she said.

Along with his military commander, Ratko Mladic, Karadzic faces charges of genocide over the Sarajevo siege and the 1995 massacre of 8,000 Bosnian Muslim men in the eastern Bosnian town of Srebrenica as ethnic cleansing.

Munira Subasic still remembers July 11, 1995, when Bosnian Serbs took over the town, separating the men from the women.

"They grabbed my 17-year old son from my arms. They pulled him one way, I pulled another. It was a battle between life and death," said Subasic. She said her hair turned grey that night, and she never saw her son or husband again.

Few Bosnian Muslims have returned to Srebrenica, previously a Muslim-majority town that was given to the Serb half of Bosnia with the Dayton accords that ended the war in 1995.

"My husband and I live in pain. We wander around the empty houses of our sons," said Suhra Malic, who said she lost two sons and 100 extended family members. She now lives near the Potocari memorial cemetery for the victims of the massacre.

"I go to the graveyard every day. These were all our sons and brothers, innocent, unarmed, hungry, thirsty," she said. "I returned in the hope to bury my sons when they find them, to be able to visit their graves. I am still waiting to find them." The bodies of her sons are among the thousands first buried in mass graves, then dug out with bulldozers and moved to hide the crime. Crushed and scattered over several locations, they await identification in a special forensic lab.

With no official history since 1990 -- a deliberate omission by authorities to avoid fanning ethnic tensions -- Bosnia's Muslims, Serbs and Croats are still largely suspicious of each other.

Olga, a 61-year-old Sarajevan Serb, said the memories of the war were too strong, and only a fair punishment for Karadzic could help Bosnia's nations go through some kind of catharsis.

"It has left a deep and irreparable scar in our souls that prevents us from seeing ahead. Everything is still blocked."

Dizdarevic says that despite the arrest, Karadzic's legacy is very much alive in Bosnia's division into a Serb and a Muslim-Croat half.

"I hope his trial won't become a farce, but will reveal the truth and create common ground for reconciliation," she said.

"The war will not be over for me until I see Karadzic's dream, the division of this country, demolished. The war will be over when I see Bosnian Serb schoolchildren paying their respects to the massacre victims in Srebrenica."