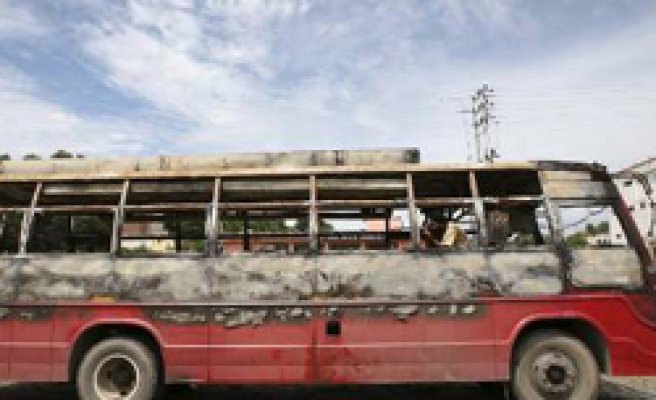 Muslim Kashmir valley was running short of food, fuel and medical supplies after Hindus stopped transport along the region's major highway in the latest protests over a land row.

Trader associations said lorries loaded with vital goods like medicines, vegetables, meat and fuel were stranded on the region's main 300-km (185 mile) highway, the only surface link between the Kashmir valley and the rest of India.

The Kashmir government had planned to give Kashmir land to Hindus, faced with huge Muslim protests, it rescinded the order, sparking Hindu demonstrations.

Three people were killed on Monday in protests in Jammu and Kashmir.

Police in Srinagar, Kashmir's summer capital, fired teargas for a second day on Tuesday to quell hundreds of demonstrators, angry over the highway blockade and reported assaults on Muslims by Hindus in the Jammu region.

"We will continue peaceful protests against the economic blockade and harassment of Muslims by Hindu extremists," said Syed Ali Shah Geelani, a Muslim leader.

Prime Minister Manmohan Singh has called a meeting of India's political parties on Wednesday to discuss the Kashmir situation.

Some Kashmir business groups have suggested routing goods through Pakistan.

The government said supplies should soon be moving to Srinagar.

"All measures have been initiated at all levels to ensure uninterrupted movement of such trucks," said Anil Goswami, a senior government official in Delhi.