Kashmiri's main alliance, All Parties Hurriyat Conference, has said it will lead a fleet of lorries carrying fruit and cross over on Monday to Muzaffarabad, to sell their produce which was rotting because of the economic blockade. 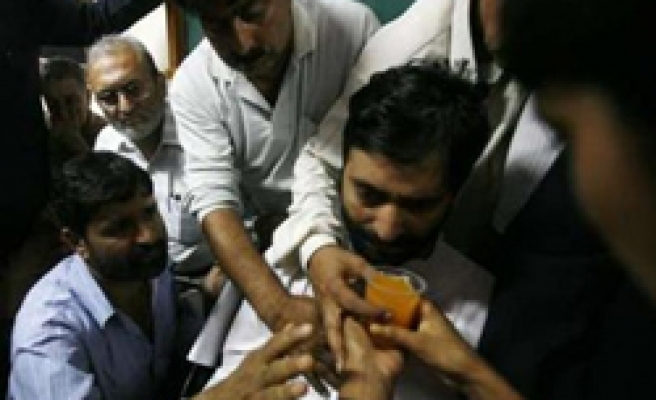 A top Kashmiri Muslim leader ended a hunger strike on Sunday after authorities assured him they would work to stop the economic blockade of a Muslim-majority region by Hindus.

Mohammad Yasin Malik, chief of the Jammu Kashmir Liberation Front who began his hunger strike on Tuesday, agreed to end his strike on Sunday after authorities promised to intervene in the dispute.

"I was assured no economic blockade shall be allowed and every effort will be made to keep the highway open," said Malik whose group is politically fighting for complete independence for Kashmir from both India and Pakistan.

The dispute began after the Kashmir government attempted to give Kashmiri forest land to Hindu.

The government then backed down on its decision, which in turn Hindus in Jammu defied it, the winter capital of the region, which is under curfew for most of the week.

Kashmiri's main alliance, All Parties Hurriyat (Freedom) Conference, has said it will lead a fleet of lorries carrying fruit and cross over on Monday to Muzaffarabad, the capital of Pakistani Kashmir, to sell their produce which was rotting because of the economic blockade.

But Indian Home Minister Shivraj Patil urged Kashmiris not to cross a military control line that divides Kashmir between India and Pakistan.

"I request you don't go by the other road. It is not good for us and not good for you as well," Home Minister Shivraj Patil told a news conference.

Indian political leaders led by Patil held talks with Amarnath Yatra Sangrash Samiti, a hardline Hindu group leading the blockade, but has so far failed to arrive at a solution.