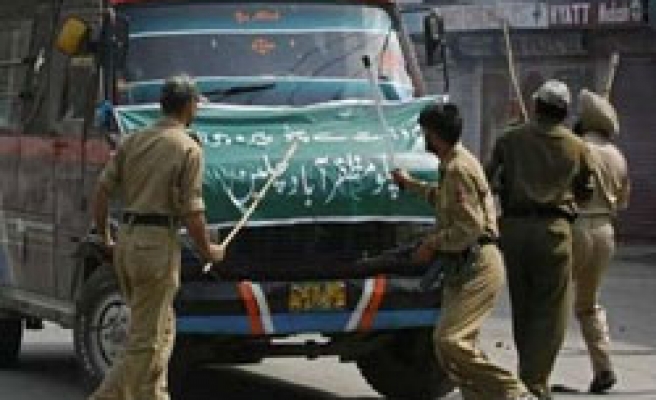 Police stopped thousands of Muslim traders them from crossing into Pakistan on Monday to protest against an economic blockade of the region by Hindus over a land row, officials said.

Sheikh Aziz, a senior Kashmiri leader, was among four people killed when police fired on the traders, police and a Reuters photographer said.

More than 180 protesters were also wounded when police fired at them. Police closed a highway to Pakistan which the traders tried to use to ferry farm products they said were rotting because of the disruption of trade with the rest of India.

Muslims tried to march towards Pakistan-controlled Kashmir to end the economic blockade of the Valley in the wake of the Amarnath land row.

Indian police detained more than 100 fruit growers, deflated the tyres of trucks carrying apples and pears and shut markets in Srinagar, where schools have been closed for the past eight days, a senior police officer said.

In Jammu, shops were shut down by Hindus, as the protests entered the 42nd day on Monday. A nation-wide protest called by India's main Hindu-nationalist opposition didn't evoke any response in the rest of the country.

Muslim traders say the Kashmir valley was running short of essentials, including fuel and medicine while fruit-growers say their produce bound for markets in Indian cities was rotting.

"We have suffered a loss of at least 20 million rupees (about $475,000) since this agitation began," said Mohammad Yousuf, president of Kashmir Fruit Growers Association. "And if the blockade continues it will be a disaster for us."

Thousands of people assembled at fruit mandi Sopore and passed through the town towards Srinagar-Muzaffarabad road following a call given by Muslim groups and traders' bodies, the sources said.

"We erected barricades at several places on the Srinagar- Muzafarrabad road," said Sajjad Ahmad, a senior police officer, adding that as a precautionary measure police were not allowing any vehicles to ply the road.
The land row has polarised Indian Kashmir, split between the Muslim-majority Kashmir valley and the Hindu-dominated region around Jammu city.

The dispute began after the Kashmir government promised to give forest land to the trust that runs Amarnath, a cave shrine visited by Hindu pilgrims. Many Muslims were enraged.

The government then backed down from its decision, which in turn angered many Hindus in Jammu, the winter capital of the region, which is under curfew for most of last week.

Police also put top Kashmiri leaders under house arrest from Sunday evening to stop them from leading the traders.