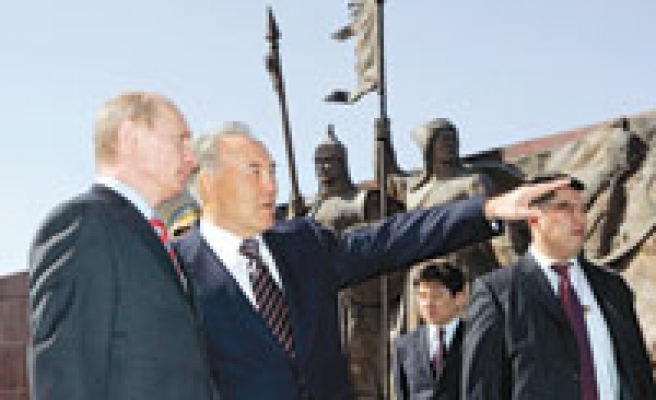 At talks with Kazakh President Nursultan Nazarbayev, Putin agreed to the expansion of a pipeline that carries oil from Kazakhstan's Tengiz field to the Russian Black Sea port of Novorossiisk. Russia previously had resisted expanding the pipeline, fearing that it would put Kazakh and Russian oil in competition for the limited number of tankers allowed to go from Novorossiisk through the overcrowded Bosporus and on to Western markets.

The resistance prompted the consortium operating the pipeline to consider an alternative route connecting with the Baku-Tbilisi-Ceyhan (BTC) pipeline that carries Caspian oil to Turkey on a route that bypasses Russia.That pipeline was strongly backed by the United States, reflecting competition between the West and Russia for Central Asia’s immense oil and gas reserves. Putin also agreed to Kazakhstan’s participation in a Russian-controlled 280-kilometer pipeline that runs from Bulgaria’s Black Sea port of Burgas to Alexandroupolis, in northern Greece.

Following the talks in the capital Astana, Nazarbayev told reporters that his country “was absolutely committed to shipping most our hydrocarbons, if not all, through (Russian) territory,” the official news agency Kazinform said.

On Friday the Russian, Turkmen and Kazakh leaders plan to discuss construction of a new pipeline along the Caspian Sea coast that would carry natural gas from Turkmenistan into Europe via Kazakhstan and Russia, according to Russian officials. The prospective deal would further boost Russia’s role as a major energy supplier to Europe and strengthen Western fears that Moscow could use its clout for political purposes.

The United States and Europe have been lobbying for a trans-Caspian gas pipeline, from Kazakhstan to Turkey via Azerbaijan and Georgia as they try to secure sources of oil and gas outside the Middle East and to draw Caspian states away from Russia and closer to the West.

Washington and Brussels have intensified diplomacy around the trans-Caspian project since Russia briefly halted gas supplies to its ex-Soviet neighbors at the start of 2006 and 2007 amid politically charged price fights that led to shortfalls in supplies to the European Union.

Putin’s visit to Central Asia also comes amid increased competition for Turkmenistan’s vast gas reserves since the death last year of President Saparmurat Niyazov, who signed deals to build export pipelines to China. Russia controls the only export routes for Turkmenistan’s gas and the main pipeline for Kazakh oil exports. From Turkmenistan, Putin Saturday will go to Kazakhstan’s Caspian city of Aktau.