'Kazakhstan-EU cooperation will benefit each part'

Oil-rich Kazakhstan, key to Europe's efforts to diversify its energy supplies, won approval last year to take over the rotating annual chairmanship of the Organisation for Security and Co-operation in Europe (OSCE). 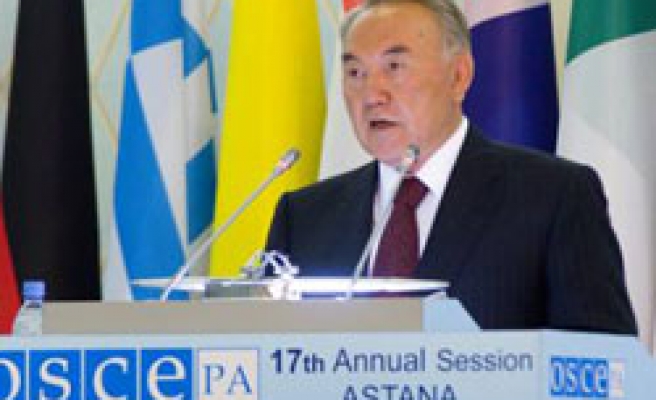 Kazakhstan's president promised the West on Sunday his country would pursue democratic change before its chairmanship of Europe's main human rights watchdog in 2010.

Oil-rich Kazakhstan, key to Europe's efforts to diversify its energy supplies, won approval last year to take over the rotating annual chairmanship of the Organisation for Security and Co-operation in Europe (OSCE).

The opposition has since criticised Kazakhstan, which has never held an election judged free and fair by OSCE monitors, of backsliding on its democracy pledges.

"We want to be a modern, democratic and prosperous nation," he told the Assembly, the OSCE's first such meeting in Central Asia. "The potential of Kazakhstan's constitution... allows us to fulfil many very important steps of further democratisation."

Nazarbayev has tolerated little dissent since he came to power in 1989. Last year, the OSCE described a Kazakh parliamentary poll, in which a pro-Nazarbayev party won all seats in the lower house, as being below required standards.

But many in Kazakhstan credit him with bringing stability after years of post-Soviet chaos and using oil revenues to raise living standards.

In his speech, Nazarbayev said a key step would be to create a more democratic parliament with at least two political parties, but gave no hints as to whether he wanted to call a snap parliamentary election to achieve the goal.

He also vowed to allow more media freedom, reform electoral law and make it easier for parties to gain state registration. However, laying out principles of Kazakhstan's future work at the OSCE, he focused more on security than human rights.

Kazakhstan, Central Asia's top oil producer and the world's fifth grain exporter, offers Europe a new source of energy as it seeks to diversify its energy supplies away from Russia.

Its efforts to foster closer ties with Europe have irritated Russia, which sees Kazakhstan -- a thinly populated nation roughly the size of Western Europe itself -- as part of its traditional sphere of interest.

"We would love to move ourselves to Europe altogether but you don't have enough room for us there," Nazarbayev jokingly told the assembly, triggering laughter. He added more seriously: "We have resources. You have the technology and investment. This kind of cooperation will benefit everyone."

OSCE officials made no judgement on Kazakhstan's efforts.

"We are confident that Kazakhstan will continue to work toward meeting the commitments outlined by Kazakhstan ... in good faith and in a transparent and inclusive manner," said Goran Lennmarker, president of the OSCE Parliamentary Assembly.