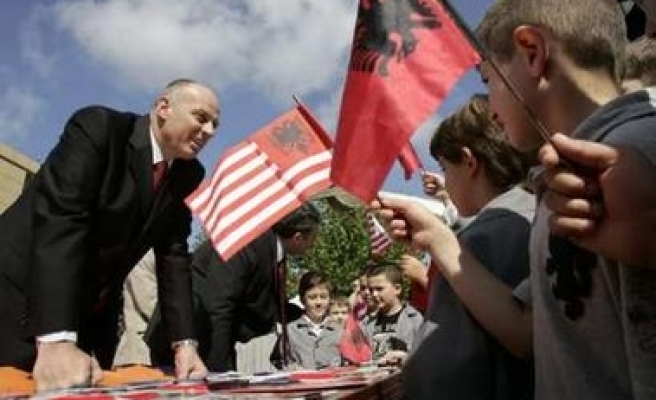 Kosovo Albanian language media on Friday reported as their top news that the seven most developed industrial countries and Russia have agreed at the G-8 summit in Germany to postpone the decision on the status of the province which has been under United Nations control since 1999.

The idea was put forward by French president Nicolas Sarcozy, but there was no official confirmation that the proposal was accepted. On the contrary, Tina Kaidanou, the head of the United States office in Pristina denied that any agreement has been reached.

“The G-8 leaders reached no agreement yesterday on the proposal of French president Sarcozy, or on any other proposal for Kosovo,” she said in a statement. “Therefore press reports that an agreement on six-month postponement has been reached, are not true,” she concluded.

There was no immediate official reaction in Pristina, but prime minister Agim Ceku has warned in an interview with the Associated Press that any postponement of status decision would accelerate “growing displeasure in Kosovo”. Ceku said that majority ethnic Albanians have fully backed chief U.N. negotiator Martti Ahtisaari’s plan which would grant Kosovo internationally supervised independence and called on the international community to live up to its promise.

“We placed our confidence in you and I call on you not to betray that confidence,” Ceku said. “We cannot wait for ever, clear up the situation, give us freedom and let us go,” he concluded.

On the other hand, Belgrade, which opposes Kosovo independence, was confident that the postponement was inevitable and that new negotiations would take place. Most western powers and members of the U.N. Security Council favor independence, but Russia has warned it might use veto power in the Council to block the move.

“As far as Kosovo is concerned, there would be interesting shifts of positions,” Serbian press quoted an unnamed Russian diplomat as saying.