The parliament convened on the anniversary of the 1389 Battle of Kosovo, when Ottoman's Turks defeated Serbs on fields north of the capital, Pristina. 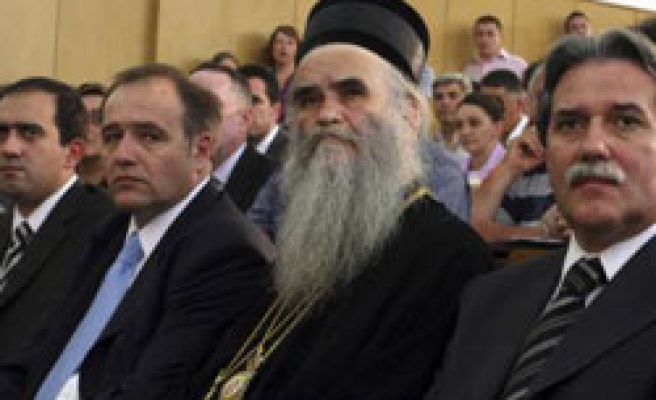 Hardline Serbs in Kosovo convened their own assembly in the divided city of Mitrovica on Saturday, in a fresh challenge to the new state's ethnic Albanian majority and its Western backers.

The assembly has no executive authority, but reflects a deepening ethnic partition of Kosovo since it declared independence from Serbia in February.

"The Serb parliament will fight against the creation of yet another Albanian state in the Balkans," Kosovo Serb nationalist leader Marko Jaksic told Reuters.

A statement read out at the session said the assembly would be "the representative body of the Serbian republic in the autonomous province of Kosovo."

Kosovo's Albanian leadership has condemned the move as an illegal provocation. But their U.N. overseers noted the assembly had no "operational role" and was merely symbolic.

They declared independence four months ago, nine years since NATO bombs drove out Serb forces. But the secession is being challenged by Serbia, with the backing of Russia, and a thin slice of north Kosovo dominated by 50,000 Serbs, just under half the Kosovo Serb population.

The north, which backs onto Serbia, is beyond the institutional reach of Pristina and currently out of bounds for a European Union police mission looking to take over law and order duties from the United Nations.

Analysts say the assembly lacks the full backing of Serbia's pro-EU Democratic Party (DS), which is poised to lead a new coalition government in Serbia having defeated nationalists.

Instead it appeared to be an attempt by nationalist hardliners to hold onto power in Mitrovica, the hub of a parallel Serb system in Kosovo. DS delegates were not present.

U.N. Secretary-General Ban Ki-moon has told the head of the U.N. mission in Kosovo to open dialogue with the new government in Belgrade to address the deepening divide, a reflection of Serbia's political grip on Serb areas.

The parliament convened on St Vitus's Day, the anniversary of the 1389 Battle of Kosovo, when Ottoman's Turks defeated Serbs on fields north of the capital, Pristina.

The epic defeat remains the pivotal event in Serb history.

NATO troops tightened security as hundreds of Serbs were escorted by Kosovo Albanian police to the Gazimestan memorial at the site of the 14th century battle.

Looking to ride a growing wave of nationalism, war crimes convict late Serb Slobodan Milosevic in 1989 exploited the mythic status of the battle with a speech at Gazimestan.

Ten years later, after wars in Bosnia and Croatia, Milosevic's army and paramilitaries drove almost one million Albanians from Kosovo in an ethnic cleasing. NATO bombed to halt a wave of atrocities and drove out Serb forces.

Kosovo has been recognised by 43 states, including Turkey, the United States and most of the European Union.