Kurdish parties plan to enter Parliament and stay there

The decision by deputies of the Democratic Society Party (DTP) to enter the elections as independent candidates will give them the opportunity to establish a parliamentary group in the wake of the general elections. 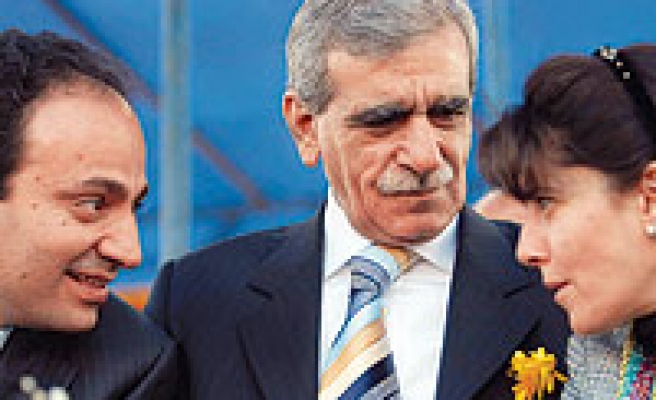 The decision by deputies of the Democratic Society Party (DTP) to enter the elections as independent candidates will give them the opportunity to establish a parliamentary group in the wake of the general elections.

However success in this strategy depends on good planning, as the Parliament on Thursday passed a law that makes the task of independent candidates harder. Should they succeed in making it to Parliament, how they will act in the Parliament is another question.

The DTP -- which hopes to have 37 deputies in the next Parliament, meaning it will far exceed the 20 deputies necessary to form a parliamentary group -- held a meeting in Diyarbakır on Monday and Tuesday in order to discuss its election strategy. The party decided that its deputies are to campaign as independents, that at least 40 percent of the candidates will be female and that election committees will be formed to plan local voting strategy. In addition they will not nominate any candidate from among the DTP mayors.

The DTP also decided that former Democracy Party (DEP) deputies Leyla Zana, Hatip Dicle, Selim Sadak and Orhan Doğan, previously imprisoned on terrorism-related charges, will also be nominated as candidates, despite the uncertainty surrounding their legal situation. The decision of DTP to run as independent candidates is based on the former experience of the party in failing to pass the 10 percent threshold for parliamentary representation, despite the party's success in garnering a very high number of votes in certain cities with predominantly Kurdish populations. In the 2002 elections the Democratic People's Party (DEHAP), a predecessor of the DTP, received about 60 percent of the votes cast in Diyarbakır, but was not able to enter parliament as their overall haul was only 6.2 percent nationwide.

Other parties are planning to nominate independent candidates from cities that are DTP strongholds. But high-ranking officials at the DTP are claming that their party organization is strong enough to cope with these challenges. DTP Deputy Chairman Sırrı Sakık told Today’s Zaman that they will form election committees in every constituency to make plans so as not to waste votes.

“The members of these committees won’t be candidates themselves,” said Sakık. “We are aiming for at least five deputies from Diyarbakır. In order to succeed in this the committee will make geographical and mathematical calculations,” continued Sakık, while denying that they will separate votes on basis of gender. “We didn’t decide on the system of organizing the voters yet,” Sakık stated.

Earlier news was leaked to the press that the DTP was to ask female voters to vote for a particular candidate and male voters to vote for another. But this system would have guaranteed only two deputies, the main reason Sakık did not favor it. An alternative method highly popular with party members is to group the voters according to their ages for different candidates.

Apart from organizing voters, the DTP is running also after celebrity candidates. There were some rumors that Gülten Kaya, wife of deceased singer Ahmet Kaya, and Gencay Gürsoy, head of the Turkish Doctors Union (TTB), would be among their candidates. But Sakık believes that it is too early to declare the candidates.

But it seems to be certain that DTP co-chairmen Aysel Tuğluk and Ahmet Türk, and former DEP deputies Leyla Zana, Hatip Dicle, Selim Sadak and Orhan Doğan will be among the candidates. Speaking to Today’s Zaman, Türk pointed out that the files against these names are in the Supreme Court of Appeals.

According to Turkish law people convicted for crimes of terrorism are not eligible to be elected to the Parliament. The former DEP deputies have not yet been convicted but their position is still under discussion. The YSK must issue notice of candidates’ ineligibility by June 20.

The DTP is also not going to nominate its current mayors, declared Sakık. “They came in order to serve and they still have projects to complete,” he stressed. Diyarbakır Mayor Osman Baydemir, already a symbolic name among the Kurdish youth, confirmed that he won’t be a candidate. Baydemir believes that other DTP mayors will follow his lead.

How they will act?

The DTP not only needs to decide how to organize its voters in order to enter the Parliament, but also on how to behave in the Parliament if the independent candidates are elected. In the 1991 elections the People’s Labor Party (HEP), another predecessor of the DTP, formed an election coalition with Social Democratic People’s Party (SHP) and managed to win 19 seats in Parliament. But at the swearing-in ceremony Leyla Zana’s insistence on using Kurdish aroused a reaction by the Parliament and the turmoil ended with the closure of the party and brought about the imprisonment of its deputies.

One of those 19 deputies was Selim Sadak, a member of the DTP Central Executive Board (MYK). Sadak said on Thursday that they will not attempt to use Kurdish. “We don’t think shouting slogans in the Parliament is the correct thing to do. We will work for the democratization of Turkey. We want to be a party of Turkey,” Sadak said.

Tarık Ziya Ekinci, a prominent Kurdish intellectual, evaluated the strategy of the DTP and said that he does not think the party will repeat the same mistakes. “Many years have past and they are able to realize the realities of Turkey”, Ekinci told Today’s Zaman, pointing out that if the DTP nominates Turkish intellectuals and charismatic names in big cities like İstanbul and Ankara they might have a chance to win seats from those cities as well.