Security around the mosque was tight on Sunday with police road blocks on roads and coils of barbled wire blocking side lanes. 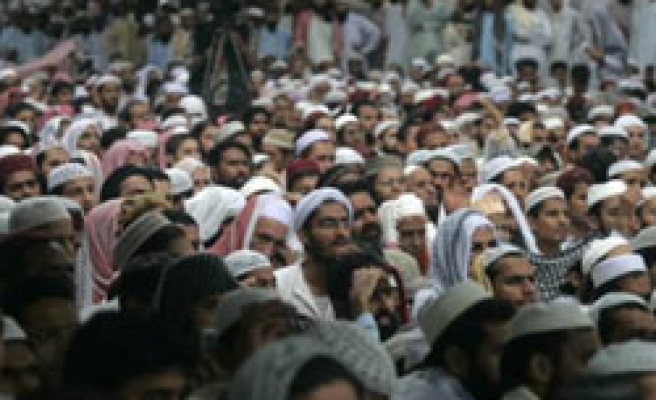 Thousands of Pakistani people vowed support for jihad on Sunday as they gathered at a mosque in the capital, Islamabad, to mark the first anniversary of an army raid on the complex.

More than 100 people were killed when commandos stormed the Red Mosque complex, which included a madrasa or Islamic seminary, on July 10 last year, after a week-long siege that began when students from the mosque clashed with police outside.

Speakers told a crowd of several thousand, most of them men, that U.S. ally President Pervez Musharraf was to blame for the bloodshed.

"Pervez Musharraf, you thought you could crush the Islamic movement by attacking the Lal Masjid (Red Mosque), but we are telling you, you have failed," Shah Abdul Aziz, a cleric and former member of the parliament, told the crowd.

"It was done at the behest of America and Bush. But I want to tell America jihad will continue, it will never stop," he said.

The protesters, most of them religious students, shouted al jihad in response.

Security around the mosque was tight on Sunday with police road blocks on roads and coils of barbled wire blocking side lanes.

People going to the rally had to pass through metal detectors and many bearded people were frisked.

"The killers of innocent male and female students do not deserve any mercy," read a banner strung up on the main road outside the mosque.

Speakers warned the new government formed after February elections against any pressure on religious schools and said any such attempts would be forcefully resisted.

They also demanded that the government release the mosque's jailed cleric, Abdul Aziz, and rebuild a women's madrasa in the complex, that was levelled after the raid.