A severe landslide has nearly obliterated one of Russia's most noted natural wonders, the Valley of Geysers, officials and environmental activists said. 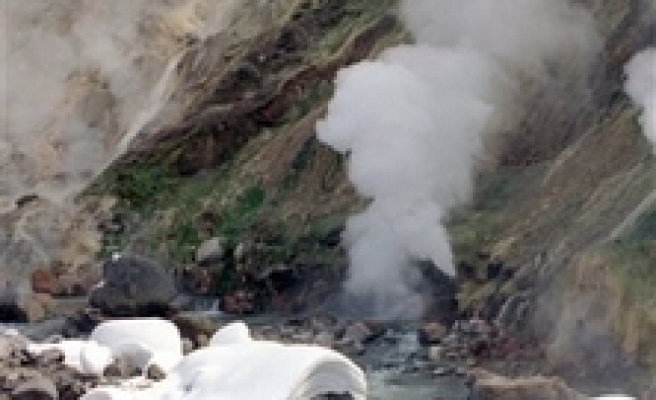 A severe landslide has nearly obliterated one of Russia's most noted natural wonders, the Valley of Geysers, officials and environmental activists said Monday.

The valley in the Kronotsky national reserve on the Far Eastern Kamchatka Peninsula contained about 90 geysers, as well as an array of thermal pools, and is the region's most popular tourist attraction.

A snow-covered mound collapsed Sunday "within seconds" and caused a massive landslide, about a mile long and 600 feet wide, burying two-thirds of the valley, park ranger Valery Tsypkov said in televised remarks.

The landslide dumped millions of cubic yards of mud and stones and destroyed most of the valley's geysers and dozens of thermal springs, stopping yards away from the valley's only hotel, he said.

Tourists and park personnel had to be evacuated, but no injuries were reported.

"The splendor of the valley has changed beyond recognition," Kronotsky national reserve director Natalya Radugova said in televised remarks.

Some officials were more hopeful about the valley's future.

The natural dam created by the landslide will turn the valley — which was discovered only in 1941 — into a thermal lake that could become a new "tourist jewel of Russia," tourism official Denis Lazarev said, according to Russian news agencies.

Experts feared many of the valley's geysers were obliterated.

"We witnessed a unique natural event," said Oleg Mitvol, the deputy head of Russia's environmental watchdog agency Rosprirodnadzor. "But the consequences of such a natural catastrophe are irreversible."

A sparsely populated peninsula, Kamchatka is located some 4,200 miles from Moscow. It was completely closed to foreigners until 1990 and now attracts thousands of tourists annually with its volcanos, geysers and national parks.

"This is tragic for humankind, in that we have lost one of the great natural wonders of the world," Laura Williams of the World Wildlife Fund said in a statement posted on the group's Web site. "But for nature, this is only a blip in the history of the planet's evolution."