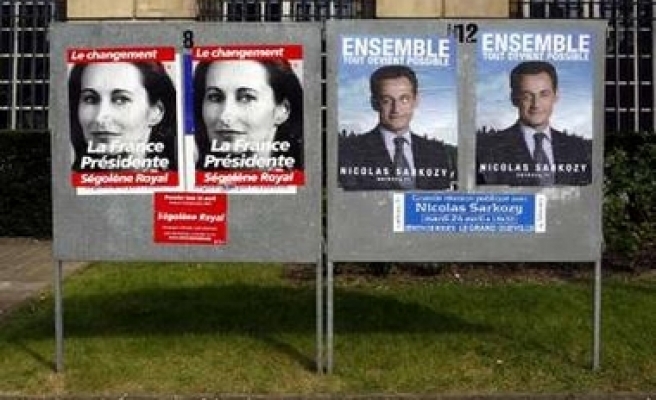 "I invite the voters who showed their confidence in me to give their vote neither to Madame Royal nor to Mr Sarkozy," Le Pen told thousands of supporters at a rally in Paris to commemorate the medieval heroine Joan of Arc.

"I invite them to abstain massively."

Le Pen shocked France by defeating the Socialist candidate in the last election in 2002 before being thrashed in the second round by President Jacques Chirac. Le Pen was disappointed with fourth place in the first round this time.

But his 3.8 million voters, like the 6.8 million who voted for centrist Francois Bayrou, could be decisive in the second round.

An opinion poll on Monday suggested 89 percent of Le Pen's voters would vote for Sarkozy but his name prompted even more boos at the rally than those of Socialists like Royal or former President Francois Mitterrand.

Le Pen says Sarkozy, a law and order hardliner, has poached many of his ideas on immigration and national identity, and his refusal to endorse the former interior minister reflects Le Pen's resentment at what he considers discrimination by France's political establishment.

But he also warned supporters against voting for Royal.

"It would be illusory and dangerous to vote for the Socialist candidate to get revenge for the hold-up carried out on our program by Nicolas Sarkozy," he said.

"We want Le Pen, not Segolene! We want Jean-Marie, not Sarkozy!" his supporters chanted.

Sarkozy, 52, who won a clear victory in the first round of the election on April 22, earlier dismissed any suggestion he needed endorsement from other political leaders.

Most opinion polls have Sarkozy 4-6 points ahead of Royal although there are a large percentage of undecided voters.

"I'm not campaigning to get the vote of Jean-Marie Le Pen or Francois Bayrou," he told France 2 television.

Sarkozy's dismissal of Le Pen reflects the confidence engendered by his consistent poll lead and his desire to woo undecided centrist voters.

But he knows he cannot afford to take the National Front leader's supporters entirely for granted.

Union demonstrations and a campaign rally by Royal will take place on the traditional May Day holiday before a potentially decisive television debate between the two candidates on Wednesday. Last Mod: 01 Mayıs 2007, 14:40
Add Comment