Thailand's oldest political party did not commit election fraud and will not be dissolved, a top court ruled Wednesday. But the Constitutional Tribunal can still decide to disband ousted Thaksin's Thai Rak Thai. 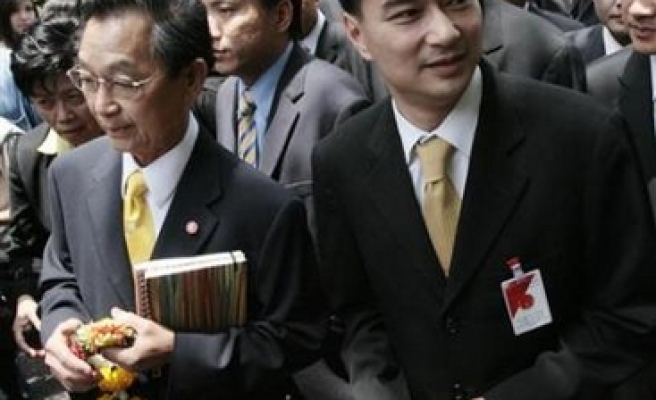 Thailand's oldest political party did not commit election fraud and will not be dissolved, a top court ruled Wednesday, easing tensions in the kingdom which was bracing for unrest ahead of the verdict.

But the Constitutional Tribunal can still decide to disband ousted prime minister Thaksin Shinawatra's Thai Rak Thai (TRT), Thailand's other main political party that is at the centre of an electoral fraud inquest.

The judgments, which some analysts warn could plunge the country into chaos, come after more than a year of political upheaval, including a bloodless military coup against Thaksin last September.

The Constitutional Tribunal, which was created after the coup, ruled that the 61 year-old Democrat Party was not guilty on all four charges stemming from last April's elections, which were later annulled as fraud allegations piled up.

It also ruled that no Democrat executives would be banned from politics.

"The facts cannot prove that the Democrats did any wrongdoing so there is no reason to dissolve the Democrats," said Thanit Kesawapitak, one of nine tribunal judges.

The Democrats, which ruled Thailand on and off for a decade before the TRT first swept the polls in 2001, faced charges including obstructing political campaigning and slandering the TRT.

Similarly, the TRT has been charged with illegally financing smaller parties to contest the 2006 election in a bid to boost the polls' credibility.

TRT officials hoped the Democrat ruling was a signal that they too would escape the election scandal unscathed.

"The oldest party survived the verdict, and we do hope that TRT, who have less than 10 years history, will get fair treatment as well," said Kudeb Saikrajang, one the TRT's executives.

Tensions had risen ahead of the court verdict, which threatened to prolong the political uncertainty that has gripped Thailand since the beginning of last year.

Thousands of troops were on alert and Prime Minister Surayud Chulanont said emergency rule would be declared if there was trouble.

But leaders from both the TRT and Democrat Party promised to respect the court's ruling, and the Democrat verdict was met with nothing but cheers from the few dozen supporters gathered at the party headquarters.

Immediately after the ruling Democrat leader Abhisit Vejjajiva thanked the judges, admitting that the party was worried about the ruling.

"Tomorrow we will have a more important mission, that is to swiftly restore democratic rule under the constitution, that we have to help improve and make it more democratic," he said.

"Many people are looking forward to the election," he added.

Elsewhere, TRT supporters gathered peacefully, waiting for the tribunal to resume reading out its verdict against their party.

Earlier in the day, police cordoned of the court building and soldiers could be seen gathered in small groups at key intersections around the capital.

Mobile phones were blocked for the verdict announcement and checkpoints were set up on highways into the capital to prevent party supporters from massing, police said.

"Based on intelligence reports, there are several groups of protestors, Surayud said earlier.

"But... I don't think there will be violence if they accept the court verdict," he added, urging people watch the ruling from home.