A missile-firing helicopter joined the Lebanese army offensive, the second day of a push against Fatah al Islam fighters inside a Palestinian refugee camp. 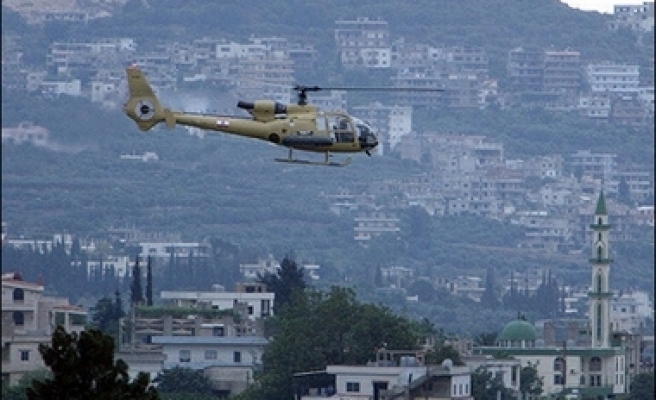 A missile-firing helicopter joined the Lebanese army offensive on Saturday, the second day of a push against Fatah al Islam fighters inside a Palestinian refugee camp.

A Lebanese air force helicopter fired two missiles in the first use of airpower since fighting began with the Fatah Islam group on May 20. The air attack was an apparent attempt to block an escape route to the Mediterranean Sea.

Four soldiers were killed and 10 wounded Saturday in the offensive aimed at gunmen barricaded in the refugee camp.

The casualties raised the army's deaths to 38 in two weeks. At least 20 civilians and about 60 fighters were killed by Friday, but casualties in the camp in the last two days were unknown because relief organizations were banned from entering.

Prime Minister Fuad Saniora said about 250 members of Fatah Islam were still inside the camp. He promised Palestinians who fled Nahr el-Bared that they will be able to return and the camp will be rebuilt.

The militants "have no choice but to surrender," Saniora told Dubai-based Al-Arabiya television, adding that the government would "assure this group justice and a fair trial."

Most of the camp's 31,000 refugees fled to the nearby Beddawi camp earlier in the fighting, but at least 5,000 are believed still inside.

Official claim dozens of Fatah Islam fighters were killed and wounded since Friday. But the group's deputy commander, Abu Hureira, said only two fighters were wounded in the last two days.

He conceded that his fighters abandoned some positions on the camp's northern edge in a "tactical" withdrawal, but denied the army had advanced.

"Let them come. We are ready," Abu Hureira told The Associated Press by cell phone, gunfire crackling in the background as he spoke. He denied reports that he and the group's leader, Shaker Youssef al-Absi, were wounded.

An army officer, speaking on condition of anonymity because he was not allowed to talk to the media, said the troops will "continue advancing today and, hopefully, we will end it."

Conditions on the ground could not be verified. Journalists were pushed back from the camp and aid organizations were not allowed inside.