Under the cover of artillery barrages, dozens of Lebanese army tanks and armored carriers moved toward a Palestinian refugee camp in northern Lebanon Friday in pursuit of Fatah al Islam inside. 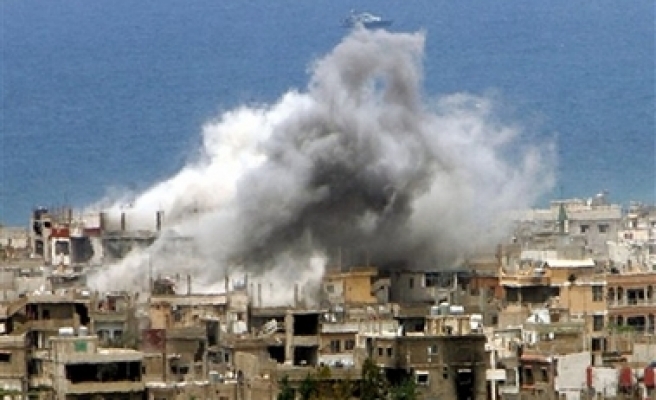 Under the cover of artillery barrages, dozens of Lebanese army tanks and armored carriers moved toward a Palestinian refugee camp in northern Lebanon Friday in pursuit of Fatah al Islam inside.

About 50 armored carriers and battle tanks from elite units massed at the northern edge of the camp and drove toward the forwardmost positions, according to AP Television News crew at the scene.

There was no confirmation that the army units were making a final push to take over the camp, instead of simply advancing to grab territory and isolate fighters in pockets. But a significant decrease in shelling, accompanied by a rise in machine gun fire from armored carriers and exchanges of automatic rifle fire, suggested the troops were already engaging the fighters.

Military officials at the high command would not comment on the troop movements.

Plumes of smoke rose out of the Nahr el-Bared camp. A cloud of smoke covered the area, particularly the northern edge of the camp, a small town with narrow, winding streets and apartment buildings.

The concentrated bombardment began in the morning, with heavy barrages targeting all parts of the camp.

On Thursday, a Lebanese soldier was killed by sniper fire from inside the refugee camp, security officials said.

The death rose to 32 the number of Lebanese soldiers killed since fighting between the army and Fatah Islam broke out at the Nahr el-Bared camp on May 20. At least 20 civilians and about 60 fighters have also been killed.

Hundreds of soldiers backed by artillery and tanks have been deployed around the camp to prevent the fighters from fleeing.

Thousands of Palestinians have fled the camp, but thousands more remain inside. Fatah Islam claims to have more than 500 fighters in the camp, armed with automatic weapons, mortars and rocket-propelled grenades.

Sporadic gunfire exchanges have continued daily since a truce halted three days of heavy fighting at the beginning of the siege.

The security officials, speaking on condition of anonymity because they were not authorized to give official statements to the media, claimed the soldier killed Thursday was hit by fighters' sniper fire from inside the camp. They said three soldiers were wounded during overnight fighting.

Lebanese Army Commander Gen. Michel Suleiman said, "We are determined to arrest the killers who attacked the army and Lebanese civilians and innocent Palestinians and bring them to justice," said during a tour of the military positions around Nahr el-Bared in the northern city of Tripoli.

About 400,000 Palestinian refugees live in refugee camps across the country.