Fighting between the Lebanese army and an armed Palestinian group at a refugee camp in northern Lebanon is escalating, despite appeals for a truce to allow humanitarian missions into the camp. 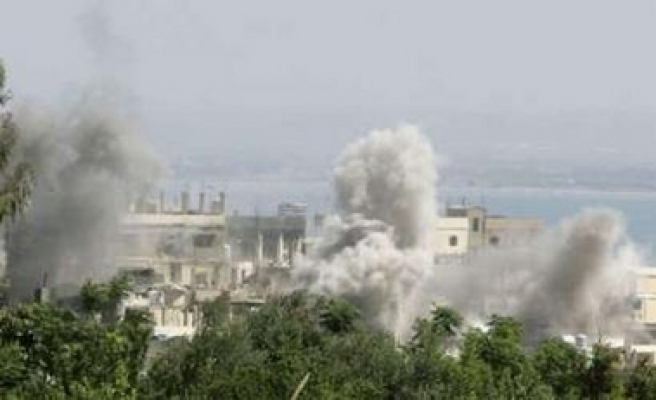 Fighting between the Lebanese army and an armed Palestinian group at a refugee camp in northern Lebanon is escalating, despite appeals for a truce to allow humanitarian missions into the camp.

The army launched shells into Nahr al-Bared camp close to the city of Tripoli on Monday, targeting fighters from the Fatah al-Islam group, as smoke rose.

Al Jazeera has been told that at least 40 people have died in the camp, with sources saying that conditions are worsening.

Fathallah Deeb, head of the camp's medical centre: "We are hearing heavy bombardment... We are receiving floods of injuries into the medical centre."

"We have many reports that houses inside the camp have been totally destroyed."

He described the shelling as a massacre and appealed through Al Jazeera for international aid. He said bodies were lying uncollected under rubble.

The precise toll of Lebanese army forces, Fatah al-Islam fighters and Palestinian civilians is unclear, but the combined number is thought to be at least 55 since fighting broke out on Sunday.

The lack of access to the camp means that the toll inside its perimeter cannot be independently verified.

Ghassan bin Jiddo, Al Jazeera's Beirut bureau chief, said on Monday afternoon that a Palestinian delegation had contacted the Lebanese government to bring about a ceasefire.

Georges Kettaneh, head of rescue operations for the Lebanese Red Cross, told reporters that 17 Palestinians were evacuated from the camp on Monday afternoon.

"The Red Cross established, in co-ordination with the Lebanese army and the Palestinian Red Crescent, a safe evacuation corridor which helped us evacuate 17 cases from Nahr al-Bared," he said.

He said that some food and water supplies were taken in.

However, Zeina Khodr, Al Jazeera's correspondent in Tripoli, reported late on Monday afternoon that Lebanese army shelling and gunfights around the camp had escalated.

Abu Salim, a spokesman for Fatah al-Islam, issued an ultimatum to the military on Monday, saying the group would take its battle "outside" the camp if the military did not back down.

There are reports that water tanks in the camp have been destroyed by Lebanese army shelling.

Abu Hisham Laila, an official of the Popular Front for the Liberation of Palestine [PFLP], speaking to Al Jazeera from inside the camp, called the Lebanese bombing of the camp "indiscriminate".

"All residents have stayed at home, taking shelter in lower floors," he said.

"We want ambulances to be allowed into the camp to transfer the civilian casualties. We also want fire brigades to enter the camp and put off the fire in many buildings."

The continued fighting has led to fears that violence could flare in other Palestinian refugee camps in Lebanon.

Fighting broke out between the army and Fatah al-Islam on Sunday morning after security forces raided homes in Tripoli to arrest suspects of a bank robbery.

At least three members of Fatah al-Islam, which has been accused of having links to al-Qaeda and Syrian intelligence, were killed after the army stormed the building they were hiding in.

Fighting at the camp, where Fatah al-Islam has its headquarters, came in response to the raid in Tripoli by the Lebanese military.

A judicial source said on Monday that one of the fighters killed in Sunday's fighting was wanted by Lebanon for involvement in a plot to bomb two trains in Germany last year.

Saddam al-Hajj Deeb, a Lebanese citizen, was one of five men charged with attempted mass murder.

Deeb was on the run and being tried in absentia.

Fouad Siniora, Lebanon's prime minister, accused the group of trying to destabilise the country and called on the people of Lebanon to "join ranks behind the army and Lebanese security forces".

Fatah al-Islam's spokesman told Al Jazeera that the group was acting in self defence and had been made a "scapegoat".

The organisation has denied links to al-Qaeda and charges that it carried out bus bombings that left three people dead in a Christian area north of Beirut in February.

The group accused the government of trying to pave the way for an offensive against Palestinian refugee camps in Lebanon.