Lebanese mourners have held a funeral on Friday for two Sunni Muslims slain this week in an attack. 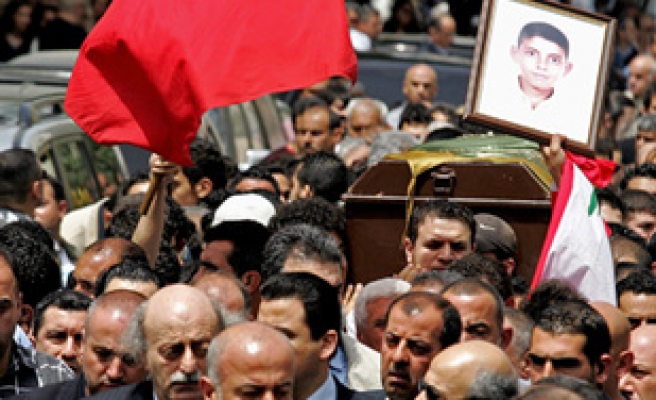 Lebanese mourners have held a funeral on Friday for two Sunni Muslims slain this week in an attack linked to sectarian tensions.

The bodies of Ziad Qabalan, 25, and Ziad Ghandour, 12, who were abducted earlier this week, were found on Thursday in a field.

Qabalan had been a member of the pro-government Progressive Socialist Party (PSP) along with Ghandour's father.

Security sources said at least one suspect had been detained and others were being sought in the killing. They said the two had been killed by several bullets to the head and body.

Their killings were believed to be a revenge attack for the slaying of a Shia Muslim activist in January clashes between supporters of the government, which has Sunni backing, and the opposition, which includes Lebanon's main Shia groups.

Rival leaders have condemned the killings and appealed for calm.

Walid Jumblatt, Druze PSP leader, said official investigations must take their course and that the killings should not be politicised.

Hezbollah, a powerful faction within the opposition, has called on Lebanon's security forces and judiciary to bring the killers to justice.

Fuad Siniora, Lebanon's prime minister, who had earlier described the incident as a terrorist act, appealed for calm after the news of the killing.

"This act aims at dragging the Lebanese toward civil strife," he said in a telephone interview with local television channel LBC. "We are in need of calm, patience and discipline."

Emile Lahoud, Lebanon's president, called for security measures to prevent "any repercussions of this deplorable incident".

Lahoud said the situation in Lebanon "cannot bear such acts that harm stability and further ... increase tension and rekindle strife".

Sporadic violence between the mainly Sunni, Druze and Christian ruling coalition and mainly Shia and Christian opposition have killed 10 people since the opposition launched a street campaign to topple the government last year.