The new government, led by Siniora, would have two Hezbollah ministers in addition to nine ministers from its Shi'ite Muslim, Druze and Christian allies. 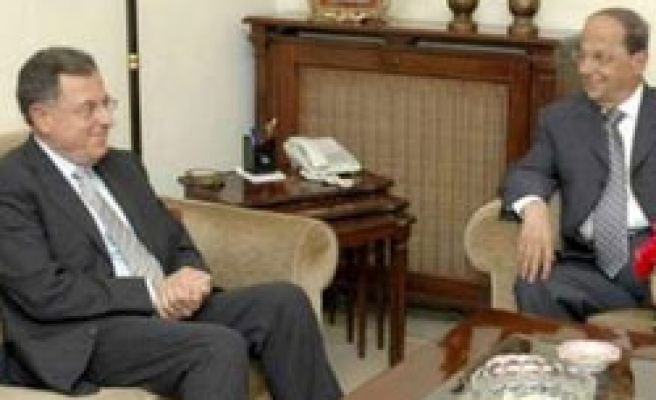 Lebanese leaders are finalising a deal on the formation of a national unity government as stipulated in an agreement that ended the country's political crisis, political sources said on Saturday.

Prime Minister-designate Fouad Siniora indicated progress in his efforts to form the new government, in which Hezbollah and its allies would have a blocking minority, but ruled out announcing it as early as Saturday.

The prime minister said he had agreed with Aoun on his share in the government, removing a main hurdle. He said he would hold similar talks with other leaders before announcing his line-up.

Lebanon's U.S.-backed majority coalition and the opposition, led by the Syrian- and Iranian-backed Hezbollah, signed a Qatari-brokered deal in Doha on May 21 that pulled the country back from the brink of a new civil war.

President Michel Suleiman was elected four days later in line with the deal, but squabbling over cabinet portfolios has held up the formation of a government.

Political sources from both sides said the breakthrough in the government came after a series of contacts by Qatari Prime Minister Shiekh Hamad bin Jassim al-Thani with rival leaders.

The new government, led by Siniora, would have two Hezbollah ministers in addition to nine ministers from its Shi'ite Muslim, Druze and Christian allies.

The ruling coalition would have 16 ministers while the remaining three ministers in the 30-member cabinet would be picked by the president, the sources said. Personalities close to Suleiman would be assigned the key defence and interior portfolios.

Leaders were holding intense contacts to finalise the cabinet list. Once the names of the ministers are finalised, Siniora would meet Suleiman and announce his line up.

The main task of the cabinet would be to ease political and sectarian tensions that had led to bouts of deadly violence, adopt an election law already agreed in Doha, and supervise next year's parliamentary election.

After the formation of the government, Suleiman is expected to call rival leaders for round table talks to discuss various divisive issues. On top of the agenda would be the fate of Hezbollah's weapons.

Hezbollah and Israel are expected to exchange prisoners later this month.