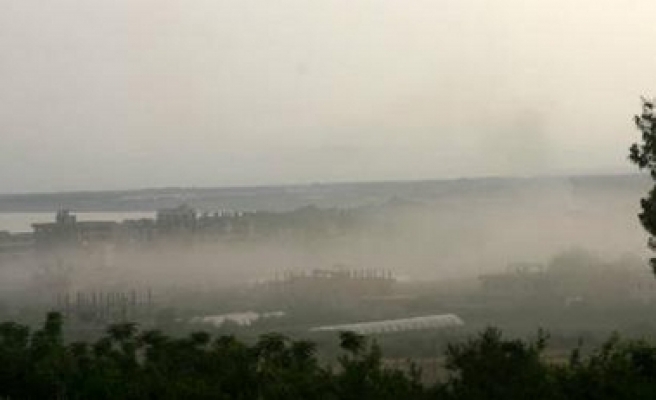 The latest battle inside Nahr al-Bared began at dawn on Tuesday. Medical sources were calling for the fighting to stop because they said there were dead and wounded on the streets.

At least 20 fighters, 32 soldiers and 27 civilians have been killed since fighting between the army and Fatah al-Islam fighters erupted early on Sunday, making it Lebanon's worst internal violence since the 1975-1990 civil war.

Fifty-five soldiers have also been wounded.

Dark smoke rose from the camp as shells crashed among the densely packed breeze-block buildings.

Medical sources inside the camp appealed for fighting to stop, saying there were dead and wounded lying on the streets.

Layla Mouad, a camp resident, told Al Jazeera by telephone: "The situation is very tragic. There are three wounded in front of my house and we can't evacuate them."

On Monday, a bomb exploded in a west Beirut shopping area even as the Lebanese army signalled it was ready for a truce with the Fatah al-Islam armed group.

Verdun is home to Ghazi al-Aridi, the information minister, who at the time was giving a press briefing at the prime minister's office on an emergency cabinet meeting to discuss the Nahr al-Bared clashes.

It was the second such attack to hit Beirut in 24 hours. The first bomb blast, which took place in a Christian district on Sunday night, killed a 63-year-old woman and wounded 10 people.

A faxed statement in the name of Fatah al-Islam claimed responsibility for the blasts and threatened more. But Abu Salim, a spokesman for the group, denied it had anything to do with the bombings.

A government source said on Monday that the army was "ready to stop firing if the other side does the same".

The offer followed attempts by other Palestinian factions to broker a truce.

Even so, three soldiers were killed in an attack on an army post outside the Nahr al-Bared camp on Monday.

For their part, Lebanese troops bombarded positions held by the fighters accused of links to al-Qaeda and Syrian intelligence, with tanks and heavy artillery earlier in the day.

But there were complaints that the shelling was affecting whole communities of Palestinians in the refugee camp in north Lebanon.

There were some reports on Monday that 30,000 Palestinians living in Nahr al-Bared were running out of food, water and medicines as the refugee camp remained virtually under siege.

Sultan Aboul Aynan, the Lebanon chief of the mainstream Fatah movement from which Fatah al-Islam splintered off, called for a halt to the army's bombardment, warning that Palestinian civilians were paying the price for the actions of "a gang of outlaws".

A temporary lull in fighting allowed the Red Cross to evacuate 17 people but doctors described seeing bodies strewn on the streets of Nahr al-Bared, which like all refugee camps in Lebanon remains outside the control of the government and in the hands of Palestinian factions.

Abu Salim Taha, a spokesman for Fatah al-Islam, said: "The army is not only opening fire on us. It is shelling blindly. If this continues, we will carry the battle outside the city of Tripoli."