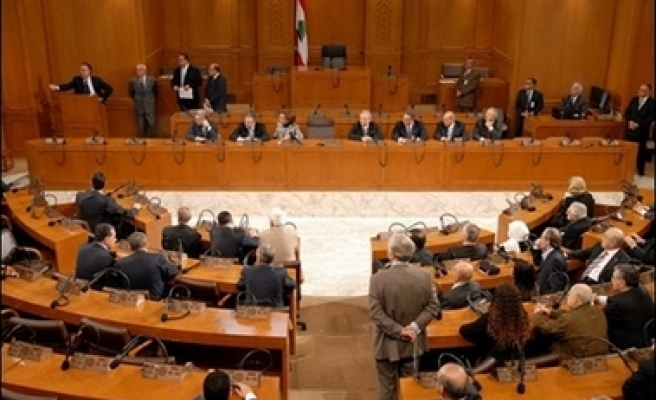 Lebanon's new government won a vote of confidence on Tuesday, securing approval for a policy statement that recognises Hezbollah's right to use all means possible to regain Israeli-occupied land. One hundred members of the 128-seat parliament voted in support of the cabinet, formed as part of a deal that defused a deep conflict between the U.S.-backed majority coalition and an opposition alliance led by Hezbollah.

The policy statement recognises the right of Lebanon, its government, people and resistance to use all means possible to regain Israeli occupied land.-- the Shebaa Farms and nearby Israeli-held parts of Ghajjar village.

The cabinet is due to govern until parliamentary elections next year. Organising the vote is one of its main tasks. "We want the elections to happen and we will work on them happening in a calm atmosphere," Siniora told the chamber.

"We accept this government because of necessity even though it is nothing more than a government of adversaries," Boutros Harb, a member of the majority bloc, told the chamber.

Five of 107 members of parliament who attended the session voted no confidence. They included majority coalition MP Solange Gemayel who had objected to language in the policy statement on Hezbollah's arms. There were two abstentions.

Hezbollah's weapons will be discussed as part of a "national defence strategy" during a national dialogue to be chaired by President Michel Suleiman. The dialogue was also agreed as part of a Qatari-mediated deal that ended the political conflict.

The statement emphasised the government's commitment to a U.N. Security Council resolution that ended a 34-day war in 2006 between Hezbollah and Israel. It also adopted economic reforms agreed at an international aid conference held in Paris in 2007.

MP Hussein al-Husseini, a former parliament speaker, announced his resignation from parliament during a lengthy address to the chamber in which he criticised Lebanon's politicians and said the policy statement lacked any substance.