Syrian FM Moualem said Lebanon and Syria must decide whether they wanted to "open the wound or dress it and move forward". 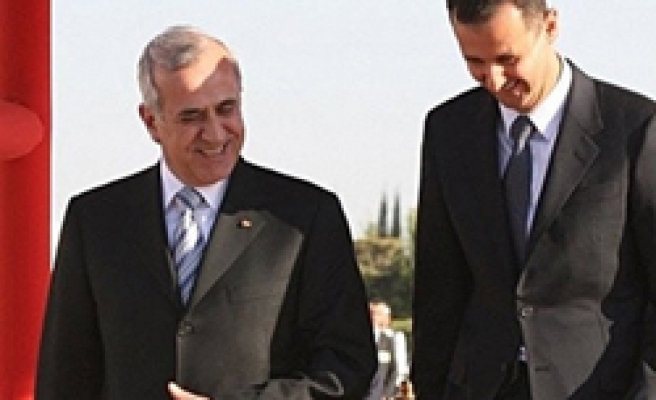 "The two presidents...have instructed their foreign ministers to take the necessary steps in this regard, starting from today," Buthaina Shaaban, an adviser to President Assad said.

Syria had dominated Lebanon until the 2005 assassination of former Prime Minister Rafik al-Hariri triggered pressure for it to end a 29-year military presence in the country.

Suleiman, who had been army chief before his election, was received at a hilltop palace overlooking Damascus. He was appointed head of Lebanon's military and describes his ties with Damascus as excellent.

The two countries announced last month in Paris that they intended to open diplomatic relations for the first time since they gained independence in 1943. Wednesday's agreement formally set those ties on the highest level.

It was Suleiman's first visit to Syria since his election in May as part of a Qatari-mediated deal that defused a bitter political conflict.

Moualem said Lebanon and Syria must decide whether they wanted to "open the wound or dress it and move forward".

"We are comfortable with the sequence of positive developments in Lebanon," he said, in reference to the Doha agreement which ended 18 months of political conflict.

Saad al-Hariri, Rafik al-Hariri's son and political heir, told journalists on Tuesday he would not visit Damascus, but hoped Suleiman would return with "excellent results".

The summit agenda included the fate of hundreds of Lebanese who went missing during the era of Syria domination and whose relatives hold Damascus responsible for their disappearance.

Economic and water agreements that anti-Syrian Lebanese politicians regard as unequal are also expected to be discussed.