Lebanon army said it would handle the issue of the communications network in a way "that would not harm public interest and the security of the resistance". 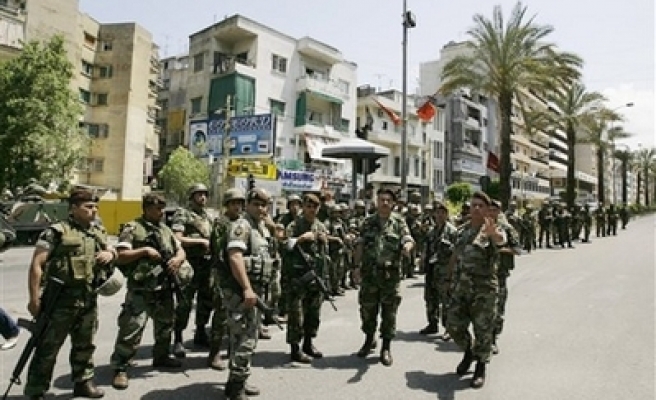 Lebanese troops patrolled Beirut on Sunday after Hezbollah fighters pulled back from areas they had seized in gunbattles with supporters of the U.S.-backed government.

But fighting raged overnight in Tripoli, Lebanon's second largest city, between pro- and anti-government gunmen. Security sources said at least two people were killed and five were wounded in the fighting.

Hundreds of soldiers backed by armoured vehicles set up roadblocks and took up positions on the streets of the mainly Muslim part of the capital. There were no gunmen in sight but youths maintained barricades on some crucial roads, ensuring Beirut's air and sea ports remained closed.

Hezbollah said on Saturday it was ending its armed presence in Beirut after the army overturned government decisions against it.

While tensions have eased slightly in Beirut, there was little progress in efforts to resolve the core political disputes that have plunged Lebanon into its worst crisis since the 1975-90 civil war.

The Hezbollah-led opposition said it would maintain a "civil disobedience" campaign until all of its demands were met.

Hezbollah took over much of west Beirut on Friday after its fighters routed supporters of the anti-Syrian ruling coalition.

Four days of fighting erupted after the government said it was taking action against Hezbollah's military communications network and sacked the head of security at Beirut airport, who is allegedly close to the group.

Hezbollah called the move against its communications a declaration of war, saying the network had played a crucial role in its 34-day war with Israel in 2006.

Prime Minister Fouad Siniora, whose legitimacy is disputed by the opposition, on Saturday handed responsibility for the moves against Hezbollah to the army, which has sought to avoid conflict with either side.

The army said it would handle the issue of the communications network in a way "that would not harm public interest and the security of the resistance". It also said it was reinstating the head of airport security.

The army is seen as a neutral player in the crisis.

Lebanon's most powerful Sunni Muslim politician, Saad al-Hariri, a close ally of Saudi Arabia, said he welcomed the army's decision and called on his supporters to avoid confrontations.

Much of the fighting has been between supporters of Hariri, leader of the governing coalition, and supporters loyal to the opposition.

Hariri's supporters still control areas in the north of the country where they have taken over several offices of opposition groups, and have kept a key crossing point with Syria shut.

Hariri is a son of the late Prime Minister Rafik al-Hariri, whose assassination three years ago triggered pressure on Syria to withdraw troops from Lebanon.

Saudi Arabia and Egypt called for an Arab foreign ministers' meeting on Sunday.