Bell, an American 23-year-old black man, was killed outside a seedy strip club in 2006 as he was leaving his bachelor party. 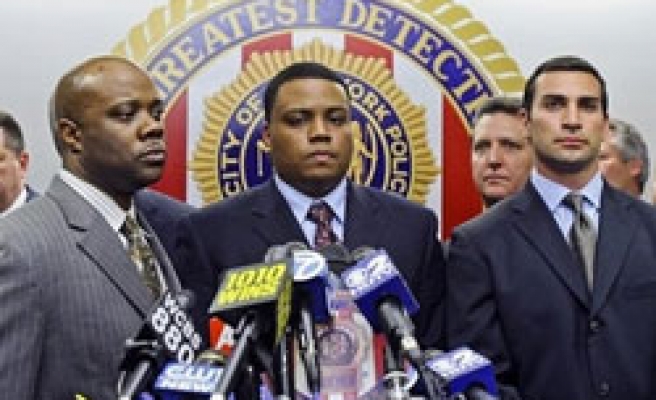 The police officers wept in joy and choked up with emotion after hearing that they had been acquitted in the 50-shot killing of an unarmed man on his wedding day.

For them, it was a rush of relief after 17 agonizing months of facing the burden of criminal prosecution and the prospect of a long stint in prison.

But their worries are far from over.

The Justice Department is still considering whether to bring a federal case against the officers, and a civil lawsuit looms. And civil rights leaders have no intention of letting interest in the case fizzle. The Rev. Al Sharpton and victim Sean Bell's fiancee and family planned a rally Saturday to keep up pressure for holding the officers accountable for his death.

"We are going to react in a methodical and serious way," Sharpton said Friday, adding that he is organizing "economic withdrawal" and "civil disobedience" that could involve going to jail, marching on Wall Street, and at police headquarters. "We are going to close the city down in a nonviolent, effective way. We're going to hit the pocketbooks."

Sharpton made his proclamation hours after three undercover detectives were acquitted of all charges in Bell's 2006 death.

In announcing his verdict, Justice Arthur Cooperman said that the inconsistent testimony, courtroom demeanor and rap sheets of the prosecution witnesses — mainly Bell's friends — "had the effect of eviscerating" their credibility.

The verdict elicited gasps as well as tears of joy and sorrow. Detective Michael Oliver, who fired 31 of the shots, wept at the defense table, while Bell's mother cried in the packed courtroom. Shouts of "Murderers! Murderers!" and "KKK!" rang out on the courthouse steps.

The officers later appeared at a news conference with the leader of their union, offering brief statements and taking no questions. "I'd like to say sorry to the Bell family for the tragedy," an emotional Cooper said.

Bell's fiancee did not comment after the verdict. Trent Benefield, a friend of Bell's who was wounded in the shooting, tearfully denounced the judge's decision as unfair.

'THEY SHOULD HAVE GOTTEN WHAT THEY DESERVE'

"They should have gotten what they deserve," he told the Daily News.

Bell, a 23-year-old black man, was killed outside a seedy strip club in Queens in 2006 as he was leaving his bachelor party. The officers — undercover detectives who were investigating reports of prostitution at the club — said they thought one of the men had a gun.

The slaying heightened tensions in the city and stoked long-standing allegations of racism and excessive use of force on the part of New York City's police, even though two of the officers charged are black.

Police had assigned extra officers to the courthouse and had helicopters in the air to help deal with any unrest Friday. But within an hour, the angry, weeping crowd of about 200 people outside the courthouse had scattered, and no arrests were made.

Protests followed later in the day, and police said two demonstrators were arrested Friday night near the site of the shooting. One was arrested on a disorderly conduct charge, the other on a charge of obstructing governmental administration, police said.

The officers had complained that pretrial publicity had unfairly painted them as cold-blooded killers. They opted to have the judge instead of a jury decide the case, a strategy that appeared to pay off.

After the verdict, the U.S. attorney's office said it would look into the case and "take appropriate action if the evidence indicates a prosecutable violation of federal criminal civil rights statutes."

In addition, relatives of the victims have sued the city, and those cases carry the potential for multimillion-dollar payouts.

Also, the officers, who had been on paid leave, still face possible departmental charges that could result in their firing.

Sharpton, an advocate for Bell's family, demanded a federal investigation.

"This verdict is one round down, but the fight is far from over," the civil rights leader said on his radio show.

The case brought back painful memories of other New York police shootings, such as the 1999 killing of Amadou Diallo, an African immigrant who was gunned down in a barrage of 41 bullets by police officers who mistook his wallet for a gun. The acquittal of the officers in that case led to days of protests, with hundreds arrested.

'THIS WAS A MASSACRE'

"An ugly pattern is emerging in New York," the Rev. Jesse Jackson said after the verdict was announced in the Bell case. "This was a massacre. This was not a shootout. And the U.S. attorney general must give America the assurance that we all have equal protection under the law."

The nearly two-month trial was marked by deeply divergent accounts of the night.

The defense painted the victims as drunken thugs who the officers believed were armed and dangerous. Prosecutors sought to convince the judge that the victims had been minding their own business, and that the officers were inept, trigger-happy cowboys.

Bell's companions — Benefield and Joseph Guzman — were both wounded; Guzman still has four bullets lodged in his body. Both testified. Guzman, a burly ex-convict, grew combative during cross-examination and said of Isnora: "This dude is shooting like he's crazy, like he's out of his mind."

The officers said that as the club closed around 4 a.m., they heard Guzman say, "Yo, go get my gun" — something Bell's friends denied.

Isnora claimed that after he warned the men to halt, Bell pulled away in his car, bumped him and rammed an unmarked police van that converged on the scene. The detective also said Guzman made a sudden move as if he were reaching for a gun.

Benefield and Guzman testified that there were no orders from the police.

With tires screeching, glass breaking and bullets flying, the officers said they believed they were the ones under fire. Oliver responded by emptying his semiautomatic pistol, reloading, and emptying it again. Isnora fired 11 rounds, and Cooper four. Two other officers who fired weren't charged.

When the smoke had cleared, there was no weapon inside Bell's blood-splattered car.