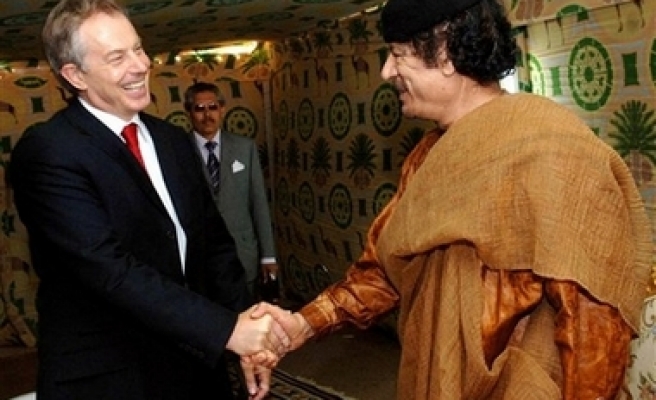 Families of Libyan children infected with AIDS said on Thursday they had reached an agreement with Britain's outgoing Prime Minister Tony Blair which could save five Bulgarians and a Palestinian doctor from the death sentence and bring medical help to the sick infants.

A spokesman for the families, and a director of the Kadhafi Foundation which has been mediating in the tragedy of the infected children, of whom 56 have died, both said a solution could be reached before the end of June.

"Representatives of the families ... and the British prime minister reached an understanding on a resolution with the international community that will satisfy all parties and put an end to the crisis before the end of the German presidency of the
European Union on June 21," said Idriss Lagha.

"We told Blair that time was no longer on the side of any party, especially the Libyan children for medical reasons," said families' spokesman Lagha.

"To reach a settlement will guarantee the life of the Bulgarian nurses, but we also want guarantees from the international community for the life of our infants," he said.

Foundation director Saleh Abdelsalam described the meeting between the families and Blair as "positive," and said it showed the serious approach of both the families and the international community in the search for a resolution.

The five Bulgarians and a Palestinian doctor have been in prison for more than eight years and were condemned to death in May 2004 after being convicted of infecting 438 children with tainted blood at a Benghazi hospital.

They are now awaiting a final verdict on their appeal against the death penalty. The hearing was expected early in May but has been delayed to a date yet to be determined.

Bulgarian Foreign Minister Ivailo Kalfin said this month that the European Union had so far contributed between two million and 2.5 million euros (2.7 million to 3.3 million dollars) to an international fund set up in 2005.

He said the money was to help the treatment of children afflicted with AIDS and to train Libyan doctors. "This is not money given as compensation," he said.

Bulgaria has insisted that the detained nurses are innocent and that compensation is not justified.