Muslim voters have emerged as a key battleground in London's mayoral elections this week. 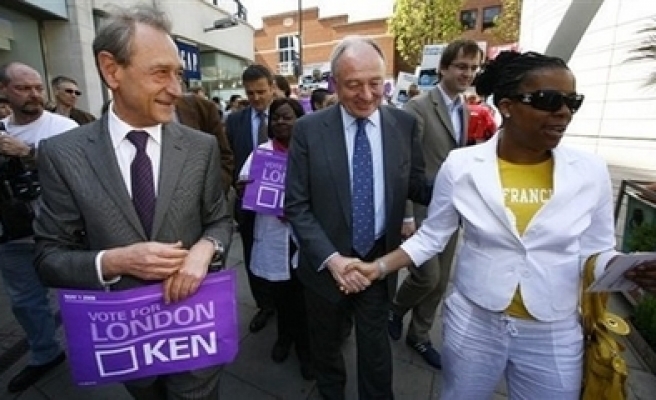 Livingstone has previously had the Muslim vote sewn up thanks to, for example, his anti-Iraq war stance and the welcome he gave top Islamic scholar Yusuf Al-Qaradawi.

Johnson, meanwhile, has had to defend himself against claims of Islamophobia after writing that "Islam is the problem" in the wake of the London attacks.

But some suggest that Muslims' voting habits could be starting to change.

"All the statistics say Livingstone is likely to get more of the ethnic minority votes (but) Labour's advantage in this sphere is declining," said Tony Travers of the London School of Economics.

"As earlier migrants have lived in Britain longer and longer, they're likely to drift off towards mainstream political behaviour."

Both Labour and Conservative campaigners were handing out leaflets to potential voters at Harrow mosque in north-west London after the last Friday prayers before the knife-edge May 1 vote.

Worshippers emerging from the two terraced houses which form the mosque entrance said their main concerns were transport and the city's economy as well as community relations.

"Different people have different priorities," said Imran Hussain, 37, who has not yet decided who he will back.

"London is the central city of the global village so they (the mayor) have a lot of responsibility to build trust and build bridges."

Mosque elders say they are encouraging people to vote and are not publicly supporting any one candidate.

"There are Conservative, Labour, Liberal -- we don't really tell them how to vote," said general secretary Ghulam Raabani, after saying goodbye to the last of the worshippers.

"We're living in Britain and want to be part of the community.

"There are slight differences but we have so many common things because we're part of the country now -- I'm living here 45 years, so we have to take part otherwise we will be nobody."

Like several boroughs on the outskirts of London, Harrow has a high number of mainly south Asian Muslim voters -- around 15 percent, according to Raabani, compared to nearly 10 percent in London overall.

Local Muslim Conservative councillor Atiq Malik, who was handing out flyers at the mosque, said he believed Johnson had a good chance to capture Muslim votes, despite claims of his Islamophobia.

"I don't want religion being invaded by politics -- let's discuss the issues," he said, citing crime and concerns over the loss of the city's green spaces to developers as voters' main concerns.

Malik -- an unusual figure within the traditionally white-dominated Conservatives -- said he thought the Muslim vote would "make a hell of a lot of difference", particularly among first-time and young voters.

"They're very serious, very much concerned about the foreign policy, but I'm telling them voting for Ken won't make any difference on foreign policy."

"There's no question that the Livingstone strategy has been to work hard on a number of subgroups within the electorate -- the young, Muslims, the minority ethnic community more generally," Travers added.

"It's more complicated now -- the rainbow is a bigger rainbow and some bits of it don't like each other too much."