Gruevski's conservative VMRO-DPMNE won the healthiest parliamentary majority in over a decade, but will seek to join forces with at least one of the two main ethnic Albanian parties. 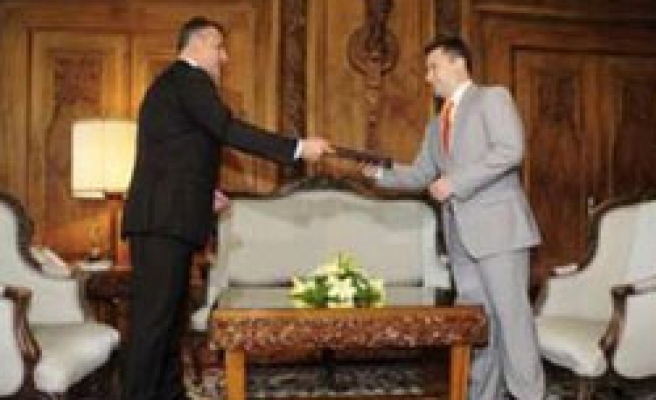 Macedonian Prime Minister Nikola Gruevski began negotiations on Monday to form a new coalition government that will try to get the country's EU and NATO ambitions back on track.

A row with Greece over the Balkan country's name, coupled with a June 1 election marred by violence and fraud, have stalled Macedonia's bid to join NATO and cast doubt over its chances of opening accession talks with the EU this year.

Gruevski's conservative VMRO-DPMNE won the healthiest parliamentary majority in over a decade, but will seek to join forces with at least one of the two main ethnic Albanian parties.

Since splitting from Yugoslavia in 1991, Macedonia has sought ruling coalitions that include an Albanian party. This has taken on greater significance since a 2001 Albanian insurgency fought for greater rights and representation for the country's 500,000 Albanians.

Gruevski was handed the mandate by President Branko Crvenkovski on Monday.

"Now I have 20 days to form the new cabinet and to consult with other political parties," Gruevski told reporters. Asked how long he would need to form a government, he replied: "I would have liked to have finished yesterday."

Western diplomats say they would prefer to see both Albanian parties join the government, after violence and intimidation during the election exposed deep divisions within the 25-percent Albanian minority.

In 2006, Gruevski sided with the Democratic Party of Albanians (DPA), the second-largest Albanian party. That outraged the larger Democratic Union of Integration, which again polled better than the DPA this time round.

The new government's main priority will be to revive Skopje's bid for membership of NATO and to secure a date for accession talks with the EU, both of which could have happened this year but now appear unlikely.

Athens in April blocked an invitation for Macedonia to join NATO alongside Croatia and Albania, demanding the country first change its chosen name, which is the same as Greece's northern province.

The EU told Macedonia on Friday it must resolve the name row in order to get a date for membership talks. It also warned against a repeat of the irregularities that marred the June 1 election.