Mahathir says will cut back on activities

Malaysia's former Prime Minister Mahathir Mohamad said Friday he would cut back on his public activities following a second heart attack in seven months that led to his hospitalization this week. 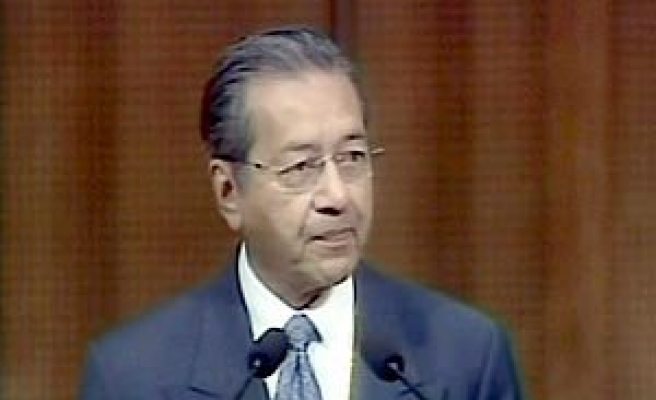 Malaysia's former Prime Minister Mahathir Mohamad said Friday he would cut back on his public activities following a second heart attack in seven months that led to his hospitalization this week.

Mahathir, 81, was rushed to hospital on Monday while vacationing on the northern resort island of Langkawi, and was treated overnight in intensive care before being moved to the National Heart Institute in Kuala Lumpur on Tuesday.

Initially, his condition was described by doctors and family members as the effects of exhaustion and the result of his previous medical condition.

But on Friday, Mahathir's aide Sufi Yusoff said the former leader had suffered a heart attack in Langkawi, the second one since November.

"Whether it was mild or extra-mild (attack) we have to wait for the doctors to say," Sufi told The Associated Press.

In his first public comments since his hospitalization, Mahathir told the national news agency, Bernama, that he could walk around his hospital bed without feeling dizzy or short of breath.

"I feel much better now," Mahathir told Bernama in his hospital room. "I also have no dietary restrictions."

Mahathir, whom Bernama described as cheerful, said he would ease up on his hectic schedule on the advice of his doctors. The agency quoted Mahathir's personal physician, Nasir Muda, as saying he would remain at the institute for a few more days.

The heart institute said in a statement Thursday that Mahathir's breathing problems were caused by lung congestion that is "associated with myocardial infarction," or a heart attack.

"With the positive response, his medication and treatment is being gradually tapered down. He is expected to continue with chest physiotherapy and light exercises," the statement said.

The November heart attack forced Mahathir — who underwent a coronary bypass surgery in 1989 — to greatly reduce his physical activities. It also put a virtual stop to his one-man campaign against Prime Minister Abdullah Ahmad Badawi.

Mahathir led Malaysia for 22 years until October 2003 and stepped down after hand-picking Abdullah to replace him. But during most of 2006, Mahathir has been attacking Abdullah, accusing him of corruption, nepotism and mismanaging the economy. Abdullah has rejected the allegations.