His decision to bring the case to a sharia court could step up pressure on Prime Minister Abdullah Ahmad Badawi's administration and the 23-year-old aide, who is already facing a civil suit by Anwar. 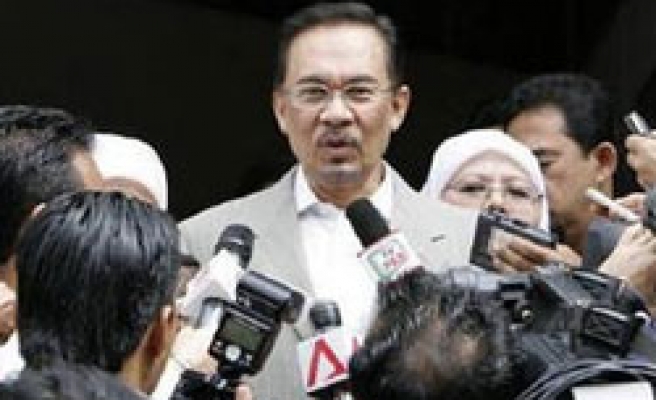 Malaysia's main opposition figure Anwar Ibrahim on Wednesday asked the Islamic court to investigate a former aide, who accused him of sodomy, for alleged slander.

His decision to bring the case to a sharia court could step up pressure on Prime Minister Abdullah Ahmad Badawi's administration and the 23-year-old aide, who is already facing a civil suit by Anwar.

Anwar says the allegation was part of a high-level political conspiracy to keep him from entering parliament and to halt his drive to lead the opposition to power for the first time in Malaysian history.

"I have decided to make this report to the Islamic court under the provision of malicious attack on my character, fabrication and lies," he said after filing the complaint at a sharia office.

Anwar, who is being investigated by the police over the sodomy allegation, is making his case in an court because the burden of proof in Islam is much heavier, his lawyer Kamar Ainiah Kamaruzaman said.

Under Islamic laws, an accuser in fornication cases has to produce four witnesses regarding the sexual act to back his or her claim, as prescribed by Holy Koran.

"In this case, it is up to him to prove," Anwar's lawyer Kamar Ainiah told reporters. "Otherwise, his testimony cannot be accepted as credible."

Police are investigating Anwar, a former deputy premier, for sodomising Saiful Bukhari Azlan, the same charge that landed him in jail for six years before the Federal Court overturned that conviction in 2004.

Saiful, who has been under police protection since he made the allegation on June 28, made his first comment on his case in an e-mail to a TV station on Monday.

"The truth will prevail. Falsehood will surely be exposed," the Star newspaper, quoting the email, said on Tuesday.

He also dared Anwar to swear in front of ulamas (Muslim clerics) over the allegation. "Just inform me of the time and date," he wrote.

Police said at the weekend they have questioned 18 people in relation to the case but have not summoned Anwar for questioning.

Sodomy is a crime punishable by up to 20 years in prison in mainly Muslim Malaysia.