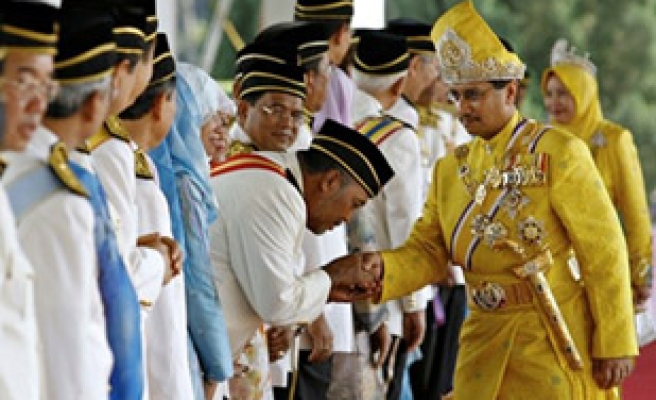 For the next five years, Tuanku Mizan, the sultan of the oil-rich state of Terengganu in the east coast of Peninsular Malaysia, will be known as the Yang di-Pertuan Agong, the Malay title for the king.

The new king was dressed in the "Muskat", a regal black jacket embroidered in gold thread and a belt buckle decorated with rubies during the hour-long coronation event at the National Palace.

He was already sworn in as monarch when his predecessor's five-year term ended in December.

With the queen, Tuanku Nur Zahirah, 33, by his side, Tuanku Mizan proclaimed he would "rule Malaysia in a fair manner" and "uphold at all times the religion of Islam".

The ceremony concluded with the blare of trumpets, a 21-gun salute and shouts of "Daulat Tuanku!" or "Long Live the King!" echoing through the throne room.

The coronation was attended by Abdullah Ahmad Badawi, the prime minister, Malay rulers, members of the royal household, government ministers, and other state and foreign dignitaries.

Government offices, banks and the stock market were closed to mark the king's coronation.

The new king has already introduced changes to the palace administration particularly in dealings with the people and government, a Malaysian newspaper reported.

Almost 80 per cent of the senior administrators have been replaced with those handpicked by Tuanku Mizan, who has been described as the "working king".

Palace officials have also been instructed to be more efficient and "people-friendly", said The Star newspaper.

Tuanku Mizan was elected the 13th king at a special meeting of the 'Conference of Rulers' on November 3 last year to succeed Tuanku Syed Sirajuddin Syed Putra Jamalullail.