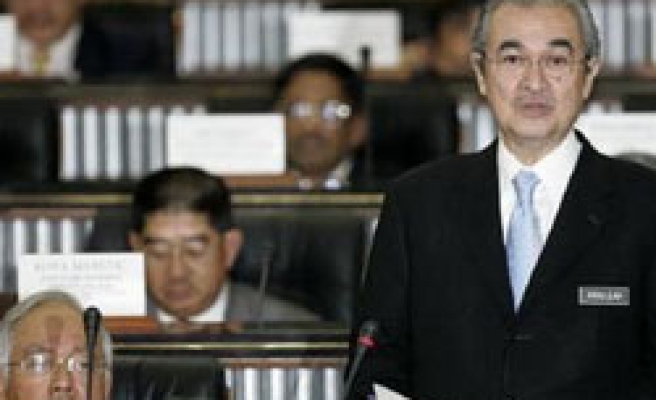 Malaysia shelved some large building projects on Thursday and pledged to spend $9 billion more to boost rice production and ease poverty, as the government sought to quell growing public anger over rising prices.

In a mid-term review of a state development blueprint, the government stuck to its average annual economic growth target of 6 percent for 2006-2010, saying domestic spending would offset the effects of weak global demand.

The government said it was reviewing spending to focus on projects that would benefit the public as high energy and building material prices strain its finances.

To free up money for other projects, the government put on hold a 1.5 billion ringgit ($461 million) road project and a 2 billion ringgit monorail, both in northern Penang state, said Sulaiman Mahbob, director general of the Economic Planning Unit.

Penang is one of five states that fell to opposition rule during the March poll.

The government also deferred plans to build administrative centres in the states of Kelantan, Sarawak and Pahang for an unspecified sum.

"The additional ceiling is to take into account additional development requirements and the increase in construction-related materials cost," the government said in the review report.

Abdullah is battling perceptions that his government hasn't done enough to shield the public from rising inflation while it reaps hefty gains from high energy prices and doles out state contracts to well-connected tycoons.

It raised petrol prices by 41 percent and diesel by 63 percent this month as part of a broad revamp of its energy price system that would save it $4.23 billion.

The government said on Thursday it would continue to gradually cut fuel subsidies, but did not elaborate.

"While the subsidy on petroleum and gas will be systematically and gradually reduced, a social safety net will be introduced to ensure the poor and deserving continue to receive some form of support to mitigate its impact," it said.

Despite the planned increase in development spending, the government said it would cut its fiscal deficit to 3.2 percent of GDP in 2010, lower than an earlier estimate of 3.4 percent.

The government expects a deficit of 3.1 percent this year, compared with 3.2 percent last year.

Annual inflation was expected to average 3-4 percent in 2008-2010, above the 2 percent recorded last year, it said.

Malaysian annual inflation hit a 22-month high of 3.8 percent in May and is expected to rise further, at a time when the authorities are eager to keep interest rates low to support domestic demand.

At 3.50 percent, Malaysia's key interest rate is among the lowest policy rates in the region.

The government also said it would increase the equity ownership of indigenous people, including ethnic Malays, to 20-25 percent in 2010 from 19 percent in 2006.

Malaysia's affirmative action favours the indigenous in jobs, education and business and aims to narrow the wealth gap between the group and the wealthier ethnic Chinese.

The government would do more to ensure the indigenous group, or bumiputras, have a controlling stake in private firms and review foreign investment and public procurement rules to facilitate more bumiputra participation in the economy.

"A special package programme will be created to facilitate greater bumiputra participation in the economy, particularly in the new growth and high value-added sectors."