Malaysia's Islamist party PAS is known for advocating a Islamic state, but that isn't stopping a non-Muslim woman from running as a PAS candidate in next month's elections. 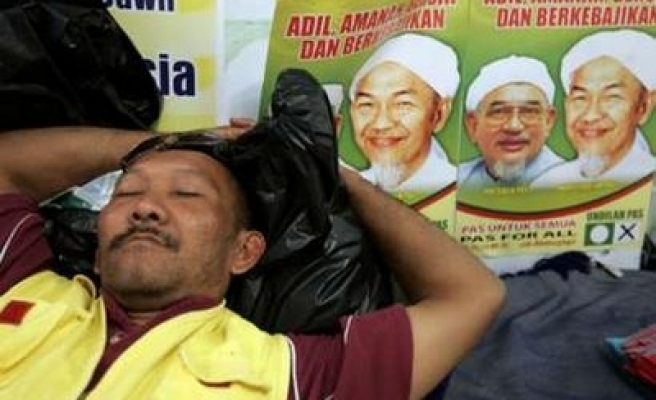 Kumutha Rahman, a 29-year-old Hindu, is standing in a mainly Malay Muslim constituency in southern Malaysia, becoming the first ever non-Muslim candidate running on a Parti Islam se-Malaysia's (PAS) ticket.

"My fellow Indians were very shocked because I'm not a Muslim and they asked me what I wanted to do," Kumutha told Reuters in an interview at her campaign office in Ulu Tiram, a town near Johor's capital Johor Baru, near Singapore.

"But they now appreciate what I'm doing. People here are open-minded," said Kumutha, who heads the women's division of the PAS' supporters' club in Johor.

Analysts said PAS' move to field a non-Muslim candidate is aimed at making the party more inclusive to attract wider support in the March 8 elections.

Kumutha, a former bank clerk, said she had studied PAS' constitution and found there was nothing in it against her principles.

PAS's goal is to turn Malaysia into an Islamic state, but it is shying away from this long-standing objective in its campaign and is instead saying Malaysia should become a "welfare state".

Kumutha faces Barisan's Maulizan Bujang for the Tiram state constituency. Maulizan won the seat in the 2004 election with an overwhelming majority of nearly 16,000 votes.

Kumutha, who studied law in the United Kingdom, said she was not worried about PAS' Islamic agenda, which includes corporal punishment for crimes such as adultery and theft, arguing that those punishments were only for Muslims.

She herself was dressed in a blouse and pants and was not wearing the Islamic headscarf that PAS generally requires women to wear. She also is not obliged to know any Arabic or be familiar with the Koran.

"ln Kelantan, there has been no demolition of Hindu or Chinese temples, but in Selangor (state) there are issues like the demolition of temples," she said. Kelantan is the only state ruled by PAS.

Kumutha, whose father drives a taxi, said she wanted to motivate young Indian women to be active in society.

"Most ethnic Indian women enjoy education nowadays but they are very afraid to get involved in any matter."