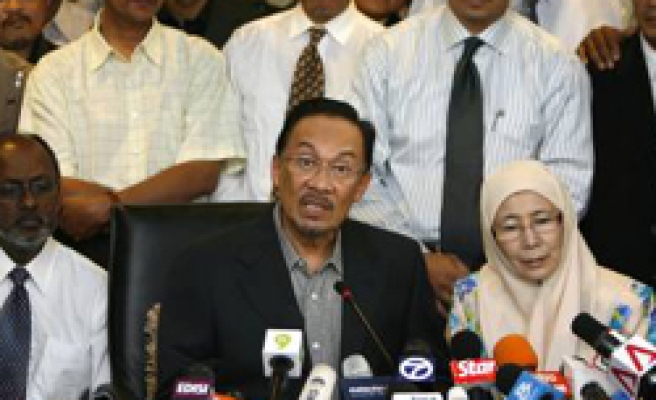 Police investigating a sodomy allegation against Malaysian opposition figure Anwar Ibrahim warned on Thursday they could compel him to give a DNA sample, threatening to further stoke tensions in the highly charged case.

Police said they were considering legal avenues after Anwar, who says the complaint is part of "a personal vendetta" against him, refused to provide DNA to a government hospital.

Mirroring events from a decade ago, when his rise was halted by a jail term for sodomy and corruption, Anwar is fighting allegations he sodomised a former aide as he leads an effort by a newly revitalised opposition to topple the government.

The former deputy premier has said the allegation is a high-level conspiracy to prevent him from entering parliament, adding that he refused to give his DNA as he did not believe in the system.

"It should not be used as a personal vendetta against me," a combative but tired-looking Anwar told reporters a few hours after he was freed on police bail.

"I was questioned for 5-½ hours, I was stripped naked including the examination of my private parts. Why treat me like a major criminal and a public enemy?"

Sodomy is regarded as a heinous crime and is punishable by up to 20 years in prison in Malaysia.

The Anwar saga, part of a drawn-out political drama, has dealt a blow to investor sentiment, provoking fears of political instability and stirring worries of a sudden change of government and policy.

Unlike his sacking and arrest in 1998 which drew tens of thousands onto the streets, there was scant show of public support for Anwar this time round.

About 100 supporters gathered at his house after he was freed on Thursday while around 400 supporters were outside the police headquarters after his arrest the previous day.

Anwar said the sodomy allegation would not deter his ambition to stand in a parliamentary by-election. His lawyers said Anwar could still be charged with sodomy later.

"It has created some negative perception. He has shown the country in a very unfair light," he told reporters.

"I do not exclude that (bringing in foreign experts) to obtain scientific evidence. But it must not interfere with the sovereignty of the country and the way we conduct our laws."

Deputy Prime Minister Najib Razak defended the police action in arresting Anwar before he had turned up voluntarily to meet investigators, as his lawyers say had been arranged.

"We should be transparent so that there will be no apprehension about what the police are doing," he said. "And we must always treat Anwar Ibrahim with the degree of decorum and respect that he deserves."

It needs 30 more seats to win a simple majority and form the government after it won a record 82 seats in the 222-seat lower house of parliament in the March general election.

Anwar was sacked as deputy prime minister in 1998 and later jailed for corruption and sodomy after leading street protests against then prime minister Mahathir Mohamad's government during the Asian financial crisis.