Anwar has said he planned to file a legal deposition soon demonstrating that his accuser, Saiful Bukhari Azlan, had close ties with Deputy Prime Minister Najib Razak and his staff. 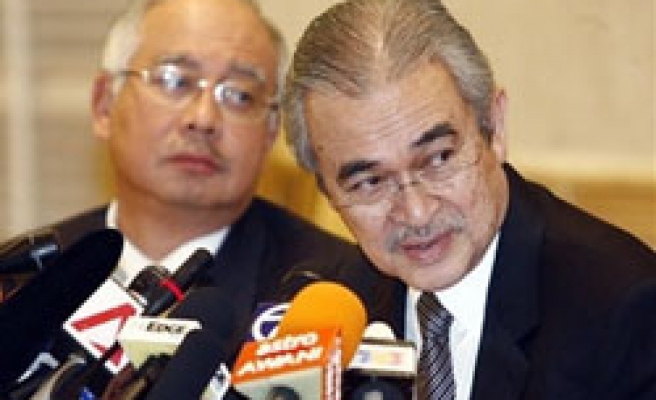 Malaysia's deputy prime minister said on Thursday the man who has accused opposition leader Anwar Ibrahim of sodomy had turned to him for help because he was "in a trauma".

Police are investigating Anwar for allegedly sodomising a 23-year-old aide. A similar charge landed the former deputy premier in jail for six years before the Federal Court overturned that conviction in 2004.

Anwar has said he planned to file a legal deposition soon demonstrating that his accuser, Saiful Bukhari Azlan, had close ties with Deputy Prime Minister Najib Razak and his staff.

Najib said on Thursday the man went to his house a few days before lodging the police report on Saturday.

"There is no conspiracy. The boy came to my house to complain to me that he was sodomised by Anwar. Initially I was sceptical."

"He needed help because he was so traumatised," Najib said. "It was up to him and the police to decide on the next course of action."

Najib said he was not sure why he became a target of Anwar.

Police have classified the sexual assault report against Anwar as sodomy, a crime punishable by up to 20 years in prison in Malaysia.

So far, the police have not questioned Anwar, who has dismissed the allegation as a top-level political conspiracy to keep him from standing for parliament, and to stymie his campaign aimed at wooing defectors from the ruling coalition. Winning a seat in parliament would be the first step on the road to Anwar's wider ambition of leading the opposition to power for the first time in Malaysian history.

The three-party alliance made historic gains in a March 8 general election, winning five of 13 state governments and coming within 30 seats of taking control of the 222-member parliament.