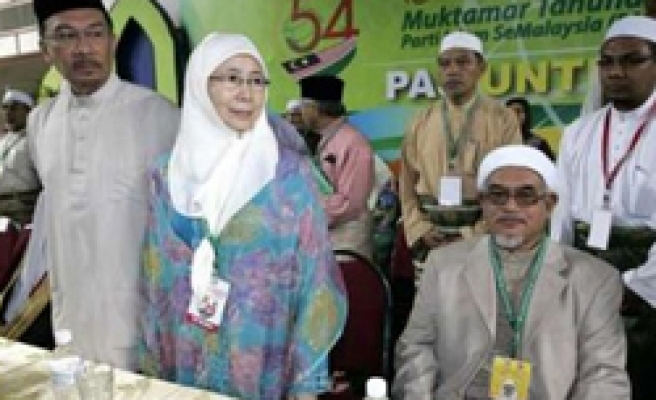 Malaysia's biggest Islamist party held back on declaring outright support for de facto opposition leader Anwar Ibrahim in his bid to topple the ruling coalition, saying he must first win a seat in parliament.

The Party Islam Se-Malaysia (PAS), which began its national assembly meeting on Friday, had been widely expected to throw its weight behind Anwar, despite his looming trial on sodomy charges.

Anwar, who is due to run in a parliamentary election on August 26, has said he will bring down Prime Minister Abdullah Ahmad Badawi's coalition by September 16 with the help of support from across the political spectrum.

"When he wins the by-election and there is a change (of government) in parliament, we will discuss," PAS president Hadi Awang told reporters when asked about his party's stand on Anwar's bid for power.

"We will see who has got majority support in a multi-racial society. Let him contest first. After that we will wait for September 16," Awang said in Ipoh, capital of the opposition-held northern state of Perak.

Anwar was charged with sodomy and granted bail by a court earlier this month, allowing him to campaign in the by-election on which he is staking his political future after a 10-year absence.

Anwar, 61, has denied the charge that he had sex with a 23-year-old male aide.

On Friday, Anwar downplayed the lack of a clear endorsement from the PAS, a key constituent of his rainbow coalition that also includes the ethnic Chinese-based Democratic Action Party.

"It is quite okay. It is normal for staunch supporters of PAS to want that," Anwar said when asked about calls from some PAS members for the party's president to lead the country instead.