'Maliki will not visit Turkey shortly'

Iraq's PM Nouri al-Maliki will not be able to pay a visit to Turkey in the "short run," although he earlier responded positively to an invitation by Turkey's PM Recep Tayyip Erdoğan to visit Ankara. 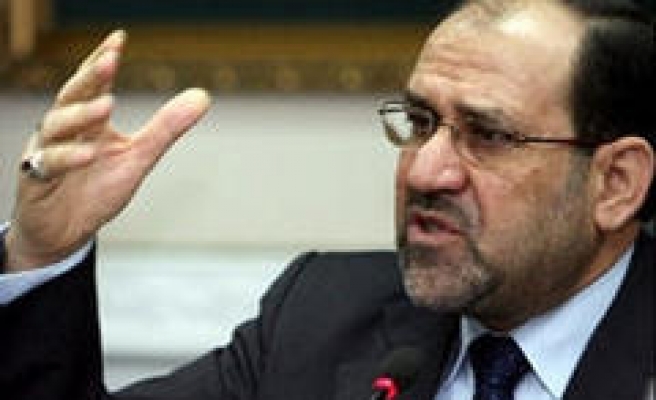 Iraq's Prime Minister Nouri al-Maliki will not be able to pay a visit to Turkey in the "short run," although he earlier responded positively to an invitation by Turkey's Prime Minister Recep Tayyip Erdoğan to visit Ankara, a spokesperson for the Maliki government has said.

In mid-June Turkish Ambassador to Iraq Derya Kanbay met Maliki and conveyed to him a letter from Erdoğan assuring Baghdad of Ankara's support in achieving Iraqi stability and boosting relations.

Maliki also expressed pleasure over Erdoğan's invitation during his meeting with Kanbay, diplomatic sources in Ankara said at the time, while noting that no exact date for the visit was set yet.

Iraqi government spokesperson Ali al-Dabbagh, in an interview with the CNN Türk news channel, said late on Tuesday that Maliki will not visit Turkey soon. "We received a nice invitation from Prime Minister Recep Tayyip Erdoğan. We accepted it in principle. But a visit will not take place in the near future due to Prime Minister Maliki's affairs in Iraq. There is not any arrangement, not any date. Iraqi Prime Minister Maliki will determine these when he finds it appropriate," al-Dabbagh was quoted as saying.

Erdogan's invitation to Maliki came after he dismissed calls for an incursion into northern Iraq in order to halt the attacks posed on Turkey by members of the outlawed Kurdis-tan Workers' Party (PKK) based in northern Iraq, saying Turkey must deal with the PKK terrorists operating inside Turkey first.

Earlier this week Iraqi Foreign Minister Hoshyar Zebari backed allegations that there is a conspiracy against the Maliki government with the help of "foreign intelligence" and said Turkey was part of a group that was working to boost Sunni participation in Iraqi politics.

Rumors of coup plots abound in Baghdad, which Maliki has fueled by accusing political rivals, apparently former Prime Minister Ayad Allawi, of "conspiring" against the government with the help of "foreign intelligence."

"There was a serious conspiracy before this government was formed, which feeds the government's imagination; the Six Plus Two Group of intelligence chiefs of Kuwait, Saudi Arabia, Turkey, United Arab Emirates, Egypt and Jordan, plus the United States and Britain," Zebari told Newsweek for its latest issue.