Unlike in probably the rest of the world, mango in several Pakistani provinces has another purpose than consumption. 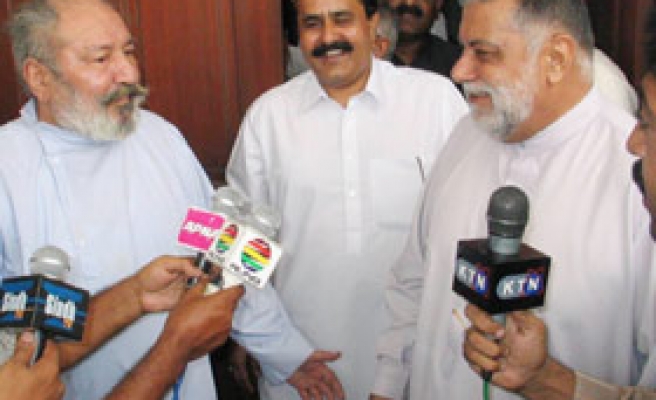 Unlike in probably the rest of the world, mango in several Pakistani provinces has another purpose than consumption.

"If you receive a crate of mangoes from your rivals in summer that means they want to reconcile with you," Sardar Imtiaz Hussein, a tribal lord, told IslamOnline.net.

"And it is considered very bad in line with the tribal traditions if you reject a gift," he added.

For many Pakistanis, mango can be used only for food purpose.

But it has a better purpose to serve in Sindh and southern Punjab provinces, where political rivals and tribal people use it to mend fences end their rivalries and bloody feuds.

Hailing from the southwestern town of Khairpur, 400 kilometers from Karachi, Hussein shunned his old enmity with his rival tribesmen after they sent him a mango gift two years back.

"When you accept the gift, the rivalry goes away automatically," he said.

"You do not have to say or discuss anything further about that."

The interior parts of Sindh and southern Punjab are famous for mango production, which is known as King of Fruits.

These areas produce 110 kinds of mangoes, which are exported to several European and Gulf states.

The United Arab Emirates is the largest buyer of Pakistani mangoes.

The most popular commercial varieties - all different in colors and sizes, and each with a distinct flavor and taste - include Anwar Retol, Dasehri, Langra,Chaunsa.

Hussein insisted that the gift sent to rivals must be not be bought from the market.

"These mangoes must be from your own farm. Mangoes purchased from the market are not accepted."

"In tribal atmosphere, it is very difficult for people to apologize verbally or publicly," he said.

"Their ego doesn't allow them to apologize publicly. Therefore, they opt for this custom."

Hussein traced the history of mango diplomacy to the 19th century.

"This is an old custom, which had been introduced during British era in Sindh. I can't tell you the exact year, but I think it was after 1843, when General Charles Nippier conquered Sindh province," he recalled.

In 19th century, the southern Punjab was also part of Sindh.

The tribal lord regretted that the custom is on a downward trend.

"This has been dwindling for last two decades," he recalled.

"Till late 1980s, most of the tribal feuds had been settled down through this custom. But after that, this trend has gone weak. Especially, the younger generation doesn't know much about that."

In high mango season - June and July - politicians send mangoes as gift to their political friends and foes.

This trend was introduced by late Nawabzada Nassarullah Khan, a seasoned politician, in 1960.

Till his death in 2003, he used to send mangoes from his own farm in Muzzaffer Garh town of southern Punjab to his political friends and rivals regularly.

Nowadays, Pir Sahib Pagara, the spiritual leader of Hur clan, and chief of Pakistan Muslim League is following this tradition.

"Pir Sahib sends mangoes from his own farms to not only his friends, but his political rivals every year," his spokesman Shams Kerio told IOL.

"The prime motive behind this tradition is to follow the Sunnah of Holy Prophet (be peace upon Him). Secondly, it is aimed at introducing mutual respect and tolerance in our otherwise charged politics," he maintained.

"Pir Shaib harbors respect for all the leaders irrespective of their political affiliation. He remembers them when mango trees bear fruits every year. That is why, all the politicians have great respect for him," added Kerio.

"The price of a mango crate is not more than a few hundred rupees, but the love and respect behind that cannot be matched by any price."

Pir Sahib, owns various mango farms in interior parts of Sindh, was not available for interview.

"I don't have any political motives behind that. It's just a tradition that you gift season's fruit to your near and dear ones," he told IOL.

"Mango is the specialty of our region that is why we gift that to our friends and colleagues," he added.

"Our forefathers had introduced this tradition, and it is our responsibility to continue that."

But mango politics harbor some unpleasant memories for Pakistanis.

Many believe that the mangoes in the Presidential C-130 air craft of then military ruler General Zia-ul Haq was somehow linked to its crash in 1998.

There have been numerous theories about what might have happened, ranging from an Israeli or American plot to that by the KGB.

No one has ever given any definitive answer as to what went wrong with the aircraft.

One of the circulated theories is that some nerve gas or chemical was planted in the mango crates which were gifted to Zia-ul-Haq during his visit to Bahawalpur, southern Punjab.