There is intense interest in whether Obama's approach to the Middle East would be different as U.S. biased policy toward Israel. 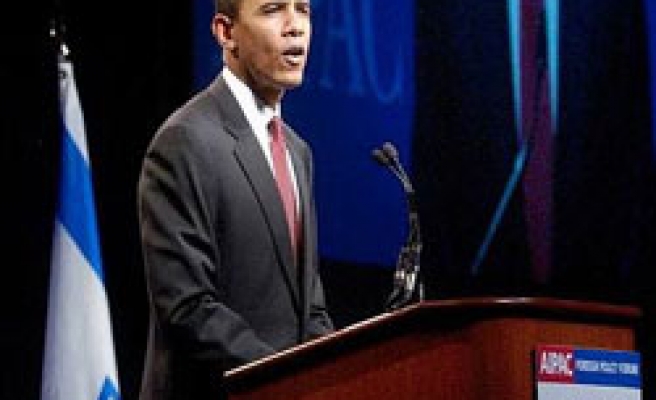 Barack Obama will take a hands-on approach to Israeli-Palestinian peacemaking if elected U.S. president but without pressuring Israel any more than his rivals for the White House, advisers say.

Obama's advisers assail U.S. President George W. Bush for taking a low-profile approach during the first seven years in office and for not following up more vigorously on the Annapolis peace summit he launched in November.

"What is true is that (Obama) is undeniably and openly committed to putting his own presidential power in the service of trying to help the Israelis achieve a two-state solution with the Palestinians," said a close Obama adviser who was not authorized by the campaign to speak for attribution.

"That doesn't equate to pressure. It does equate to a sustained commitment."

The Democrat, who would be the first black American president if elected in November, has yet to fully outline a detailed approach to Middle East.

Casting himself as the candidate of change, he has "vowed not to change the unflinching support of Israel" that is a cornerstone of U.S. Middle East policy.

"The tenets of Sen. Obama's Middle East policy are that he is a staunch supporter of Israel and strongly supports Israel's right to self-defense," said Rep. Robert Wexler, a Florida Democrat who the senator consults on Middle East issues.

Obama had called for direct talks with Iran and suggesting he would be more inclined than other presidential candidates to pressure Israel to make concessions toward the Palestinians.

"There is no evidence to that," said Daniel Kurtzer, former ambassador to Israel and Egypt, recently recruited to advise Obama on the Middle East and reach out to Jewish voters.

The senior adviser said Obama is highly sensitive to the dilemma many Israelis face, on the one hand.

Many view U.S. policy as biased toward Israel, there is intense interest in whether Obama's approach to the Middle East would be different.

Some Muslim commentators closely following the U.S. election find little indication of that in his rhetoric or Senate record, which includes his co-sponsorship of a resolution during the 2006 Lebanon war that strongly backed Israel.

Hussain Abdul-Hussain, a U.S.-based journalist for the Daily Star of Lebanon wrote: "Even from a Lebanese viewpoint, there is no reason to believe that Obama would be better than Bush on Israel."

While in sync with Bush's policy of championing to defend Israel, Obama also backs the administration's policy of shunning the group Hamas, which seized control of the Gaza Strip last June, in favor of talks with rival Palestinian President Mahmoud Abbas.

Obama is facing greater difficulty in defining for voters his views on the Middle East than has New York Sen. Hillary Clinton, his rival for the Democratic nomination and a former first lady, or Arizona Sen. John McCain, the Republican nominee who has been a prominent voice on foreign policy for years.

On Israel, McCain is likely to be as staunch an ally as fellow Republican Bush. Clinton benefits from the reputation that her husband, Bill Clinton, had of rock-solid support for the Jewish state.

In trying to make his views known, Obama a year ago gave a speech to AIPAC, the Washington-based pro-Israel lobbying group, in which he recounted a 2006 visit to Israel.

Obama said in the speech that achieving peace in the Middle East would require the lifting of heavy stones by the United States and Israel to make the dream a reality.

But Obama insisted that any effort to achieve a two-state solution to the conflict "begins with a clear and strong commitment to the security of Israel: our strongest ally in the region and its only established democracy. That will always be my starting point."