'Mars once had an ocean': Study

A paper in this week's issue of Nature by University of California, Berkeley, geophysicists demolishes one of the key arguments against the past presence of large oceans on Mars. 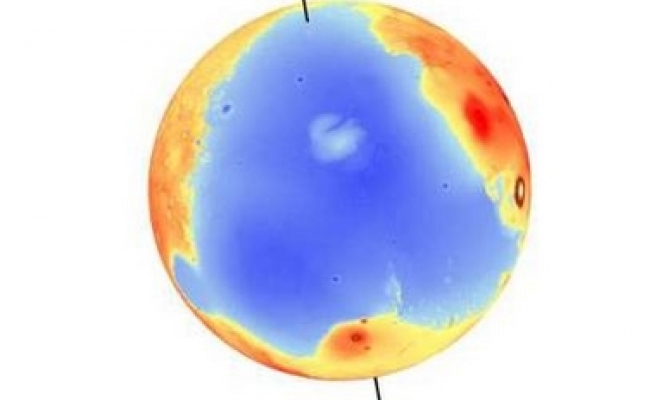 A paper in this week's issue of Nature by University of California, Berkeley, geophysicists demolishes one of the key arguments against the past presence of large oceans on Mars.

Even from Earth, a large plain surrounding the planet's north pole looks like a sediment-filled ocean basin. In the 1980s, Viking spacecraft images revealed two possible ancient shorelines near the pole, each thousands of kilometers long with features like those found in Earth's coastal regions. The shorelines -- Arabia and the younger Deuteronilus -- date from between 2 and 4 billion years ago.

In the 1990s, however, the National Aeronautics and Space Administration's Mars Global Surveyor mapped the Martian topography to a resolution of 300 meters, and found that the shoreline varies in elevation by several kilometers (more than a mile), rising and falling like a wave with several thousand kilometers from one peak to the next. Because shoreline elevations on Earth, measured relative to sea level, are typically constant, many experts rejected the notion that Mars once had oceans.
UC-Berkeley scientists have now discovered that these undulating Martian shorelines can be explained by the movement of Mars' spin axis, and thus its poles, by nearly 3,000 kilometers along the surface sometime within the past 2 or 3 billion years. Because spinning objects bulge at their equator, this so-called "true polar wander" could have caused shoreline elevation shifts similar to those observed on Mars.
"When the spin axis moves relative to the surface, the surface deforms, and that is recorded in the shoreline," said study coauthor Michael Manga, UC-Berkeley professor of earth and planetary science.

"On planets like Mars and Earth that have an outer shell, or lithosphere, that behaves elastically, the solid surface will deform differently than the sea surface, creating a non-uniform change in the topography," added primary author Taylor Perron, a former UC-Berkeley graduate student now a postdoctoral fellow in the Harvard University Department of Earth and Planetary Sciences.

Calculations by Perron show that the resistance of Mars' elastic crust could create several-kilometer elevation differences for features like a shoreline, in accord with topographic measurements. The Arabia shoreline varies in elevation by about 2.5 kilometers, while the Deuteronilus shoreline varies by about 0.7 kilometers.

"The mere fact that you can explain a good fraction of the information about the shorelines with such a simple model is just amazing. It is something I never would have guessed at the outset," said co-author Mark Richards, professor of earth and planetary science and dean of mathematical and physical sciences at UC-Berkeley.
Richards goes so far as to add, "This really confirms that there was an ocean on Mars". Last Mod: 14 Haziran 2007, 10:29
Add Comment