Six people were killed while 100 others were injured in the explosion in one of the Turkish capital city Ankara's busiest commercial centers, security officials said. 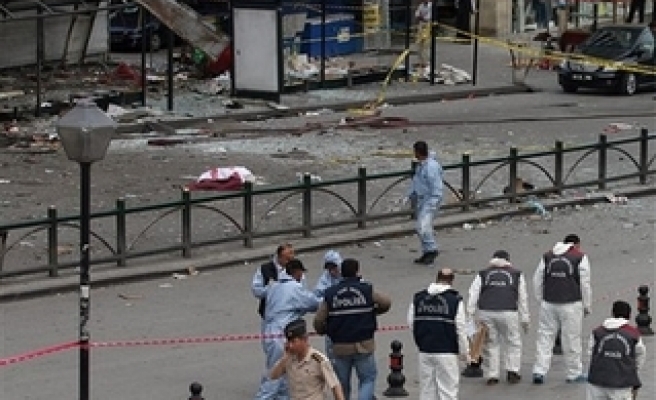 Six people were killed while 100 others were injured in the explosion in one of the Turkish capital city Ankara's busiest commercial centers, security officials said.

The explosion occurred during evening rush hour outside one of the oldest shopping centers in the commercial neighborhood of Ulus. Anti-Terror teams seized security camera tapes at another shopping center across the scene of the explosion.

Security manager of the shopping center said that their cameras on the facade recorded the explosion, and that they handed over the tapes to security forces.

Most of those who were injured in the blast, were owners of shops in the center as well as people and peddlers waiting in bus stops.

Search-and-rescue teams and sniffer dogs are also in the scene to find those trapped under debris. The neighborhood where the blast occurred is Ulus, the oldest part of the capital city. It lies near museums and the old parliament house. The shopping center that was damaged is called Anafartalar and sells mostly clothing and textiles.

Pakistani Military Attaché Colonel Zubeyd Ahmet visited Pakistani people, who were injured in the explosion in a shopping center in the Turkish capital city of Ankara.

I condemn those who staged this heinous offense targeting innocent people, and the idea they represent," Turkish President Ahmet Necdet Sezer said on Tuesday after an explosion ripped through a busy shopping center in the capital city of Ankara.

President Sezer expressed his profound sorrow over the explosion in which six people were killed and nearly 100 others were injured. "I condemn those who staged this heinous offense targeting innocent people, and the idea they represent.

Those who are trying to disturb tranquillity in our country, will never be allowed to reach their obnoxious targets as a result of our nation's solidarity and our security forces' self-sacrificing efforts," he said.

"Our state has the necessary power to overcome all kinds of problems. We wish that our nation will not suffer such a grief once again," he emphasized. President Sezer also offered his condolences to those who lost their beloved ones in the explosion.

Following his visit to injured people in Ankara's Hacettepe Hospital, Buyukanit told reporters that the incident shook him, noting that he thought it was not a common crime when he saw the scene of explosion.

"It was a blast caused by an organized terrorist organization," he said.

Asked about the goal of the terrorist organization, Buyukanit said "you may expect it in all metropolises. I am not saying that it will occur, but they may attempt these kind of things."

Meanwhile, main opposition Republican People's Party (CHP) Chairman Deniz Baykal said, "it is a sad and vicious incident. We should act in solidarity as the nation."

After receiving information from authorities in the scene of the blast, Baykal told reporters that experts have not been able to clarify whether the blast was caused by an explosive or a suicide bomber.

"They are carrying on their investigations," he said. Indicating that Turkey can not be intimidated by such methods, Baykal said "we have to state a resolute, clear and strong attitude against terrorism. We have to show clearly that terrorism can not engender any political consequences."

Turkish Foreign Minister & Deputy Prime Minister Abdullah Gul said that there was no Pakistani fatality in the explosion in a shopping center in the capital city of Ankara.

After visiting the injured people in the Hacettepe Hospital, Gul told reporters, "there was no Pakistani citizen among victims of the blast. We will make a detailed statement about the explosion tomorrow."

Meanwhile, Ankara Governor Kemal Onal said that technical teams would carry out their efforts till the morning.

Asked whether any organization was involved in the explosion, Onal said that such claims were nothing but speculations.