Mauritania spans Arab and black Africa and has been an ally in so-called U.S.-led war on terror. 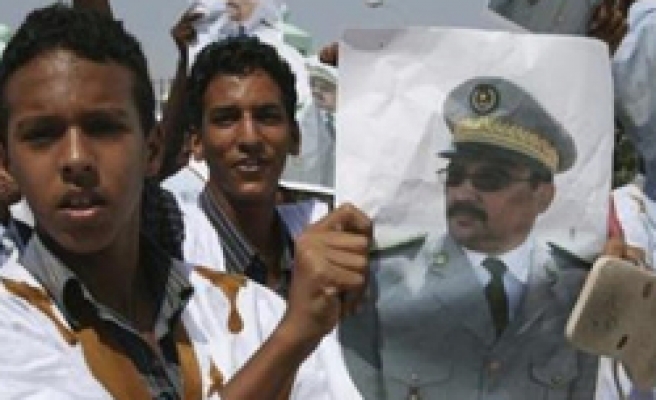 Mauritania's coup leaders have announced they will appoint a government to run the country until new elections, defying a chorus of international demands to restore the first democratically elected president.

Abdallahi is being held at a secret location. His daughter, released from house arrest with the rest of his family late on Thursday, said Abdallahi had been in need of medical attention.

"His doctor visited him last night, and said he has to have a little operation, but it is not serious," she told Reuters shortly after her release from house arrest, declining to give details of the exact nature of the president's medical condition.

The only contact Abdallahi had been allowed with his family was a handwritten list brought to the presidential palace by soldiers, in which he asked for antibiotics, clothes, books, and aftershave, she said.

Mauritania spans Arab and black Africa and has been an ally in so-called U.S.-led war on terror. The country is also Africa's newest oil producer although production remains small.

Washington has joined international condemnation of Abdallahi's ouster, demanding the restoration of his government and announcing the suspension on Thursday of non-humanitarian aid, worth over $15 and mostly military-to-military funding.

The self-styled "High State Council" pledged on Thursday to hold a free presidential election as soon as possible. It gave no date.

In a separate communique published overnight by state news agency, the junta said it would assume the powers of the president until the election and would appoint a government to rule the country in the meantime under Abdel Aziz's authority.

It said it would issue a constitutional decree in the coming days formalising the powers of the High State Council.

Other state institutions would continue to operate as normal, including parliament -- where the decision by a majority of pro-Abdallahi legislators to quit his party on Monday served as one of the main triggers for the coup.

Many of those legislators joined hundreds of people on a march through the capital Nouakchott on Thursday to show support for the coup. Police fired tear gas at small crowds who held counter-demonstrations against the military takeover.

Abdallahi won elections last year after a 2005 coup also instigated by Abdel Aziz, which ended years of dictatorship, but he has faced growing opposition from parliamentarians who complain he has failed to consult them.