Medvedev hits out at 'sale' of Russian official jobs

Speculation about the sale of official posts has circulated in Moscow for years, with rumours about hopeful candidates bringing suitcases of cash to secure lucrative government jobs. 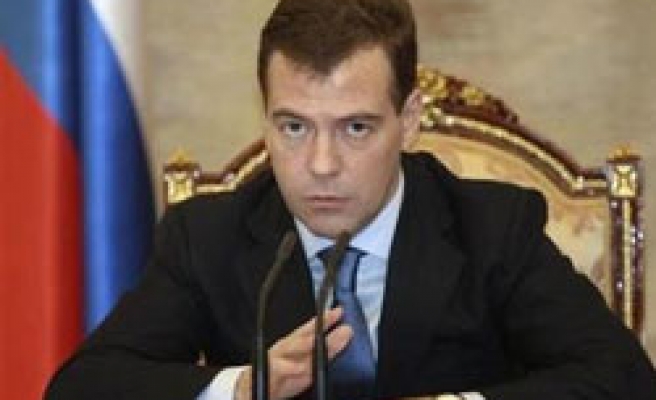 Russian President Dmitry Medvedev hit out on Wednesday at the corrupt sale of official jobs, saying it was an "outrageous" practice that discredited the state and held back Russia's development.

Medvedev, who took over as president in May, says endemic corruption threatens Russia's national security and has vowed to make the fight against graft one of his main priorities.

"Staff decisions are very frequently decided by connections, on the principle of personal loyalty, or unfortunately and more outrageously, for money -- that is to say, positions are being sold," Medvedev told a meeting on staffing issues.

"The Russian state is a democracy, not some medieval despotism, so we must break out of this vicious circle and attract the best people, the best educated specialists, and motivate them," Medvedev said, according to a transcript of a speech published by the Kremlin.

Speculation about the sale of official posts has circulated in Moscow for years, with rumours about hopeful candidates bringing suitcases of cash to secure lucrative government jobs.

Corruption is a way of life for many Russians at every level of society -- from small bribes paid to traffic policemen or schools to kickbacks paid to senior officials who hold sway over Russia's vast natural resources.

A 2007 index of global corruption perceptions prepared by Berlin-based Transparency International ranked Russia joint 143rd out of 180 countries, with Indonesia, Gambia and Togo.

Medvedev, a former corporate lawyer who used to chair the board of Russia's gas behemoth Gazprom, is not the first Kremlin leader to promise to root out corruption.

Russia's leaders have repeatedly started anti-graft drives in the past with a few high profile arrests of bribe-takers but little wider impact.

Investors say the incidence and size of bribe-taking has soared in recent years as Russia's economy has boomed. Opinion polls show corruption is one of voters' main concerns and a senior prosecutor estimated in June that corruption was equal to a third of the budget, or $120 billion a year.

Medvedev, who also taught law, has said Russian officials must make life easier for businesses by cutting down on red tape, one of Russia's banes since Tsarist times.

He bemoaned the decline of the elite following the 1991 collapse of the Soviet Union, and said the state was having trouble filling positions -- reflecting complaints from Russian business leaders who say they can't find employees because of a lack of qualified staff and soaring wage inflation.

"You know just as well as me the staffing hunger being felt by state organs and private structures, but they are able to motivate staff with high wages," Medvedev said.

He said bureaucrats should be rotated through jobs to decrease the "enormous corruption risk" and that arcane human resource departments in ministries should be reformed, allowing positions to be properly advertised.

Medvedev also suggested setting up a reserve of staff for posts in the presidential administration, whose merits he would personally check.