'Medvedev is no softer' 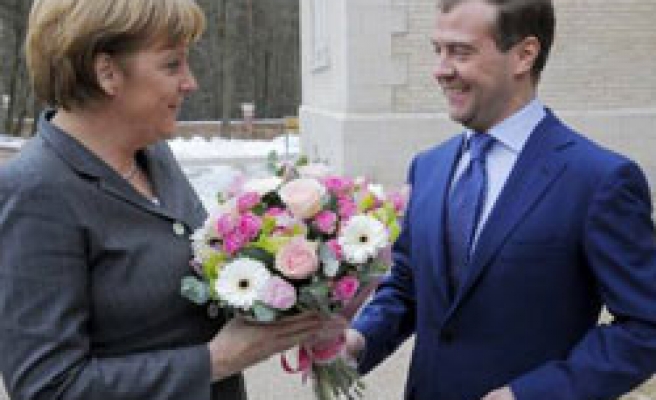 President Vladimir Putin on Saturday warned the West it could expect no easing of Russia's combative foreign policy under his protege, president-elect Dmitry Medvedev.

At his first meeting with a foreign leader since his election, Medvedev stressed to German Chancellor Angela Merkel that he would seek continuity in foreign affairs.

Putin, speaking to reporters at a joint news briefing with Merkel before the Medvedev meeting, dismissed hopes that his protege would strike a softer tone in foreign policy after being sworn in as president in May.

"I have the feeling that some of our partners cannot wait for me to stop exercising my powers so that they can deal with another person," Putin said. "I am long accustomed to the label by which it is difficult to work with a former KGB agent."

"Dmitry Medvedev will be free from having to prove his liberal views. But he is no less of a Russian nationalist than me, in the good sense of the word, and I do not think our partners will have it easier with him."

When Merkel later met Medvedev, she referred to Putin's comments, quipping: "I refrained from saying 'I hope they won't become more difficult either'".

Medvedev said: "I am assuming we will have a continuation of that cooperation which you have had with President Putin... You have had big negotiations and that makes my task easier."

Putin, who is expected to preserve significant influence as Medvedev's prime minister, has been credited at home with restoring some of Russia's international clout after the chaos of the 1990s.

But the former KGB spy has clashed with the West over NATO expansion, Kosovo's independence, U.S. plans to put a missile shield in central Europe and the war in Iraq.

The relationship between Medvedev and Merkel, a physicist from the former East Germany who speaks Russian, is likely to play a key role in relations between the two countries and with the European Union.

Merkel, after meeting Putin, said she saw Medvedev as her "immediate partner in dialogue" ahead of the Group of Eight's meeting in Japan later this year.

Merkel was expected to voice concern about the fairness of the vote Medvedev won after international observers and opposition groups have criticised the March election as unfair.

Putin says the election was held in strict accordance with the Russian constitution.

Germany is by far Russia's biggest single trading partner, with a record $52.8 billion in bilateral trade in 2007. German firms put $3.4 billion into Russia last year and have key investments in Russia's energy sector.

Merkel, who has in the past scolded Putin over human rights, has also sought to boost trade with Russia's booming economy and to mediate between Moscow, Washington and Russia's EU partners.

The German Chancellor has been more critical of Putin's Russia than her predecessor Gerhard Schroeder, but is keenly aware of Germany's dependence on Russian energy and Moscow's role in international disputes like Iran.