Medvedev also told Bush Russia will push for dialogue with Iran on its nuclear programme but expects reciprocal signals from Tehran, according to a Russian official. 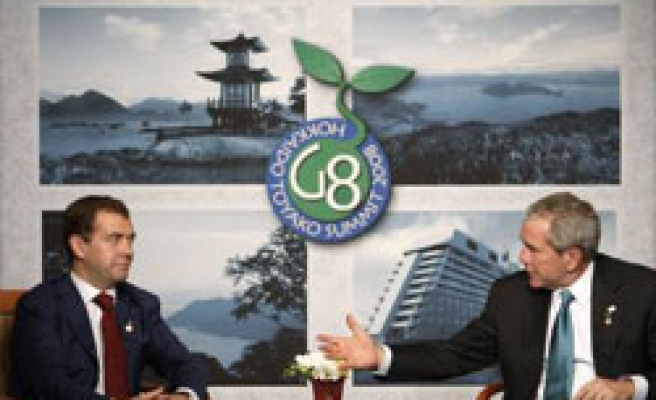 "The Russian president openly expressed his serious concern about the media reports about talks between the US and Lithuania on the possible installation of anti-missile bases," said Medvedev's diplomatic adviser Sergei Prikhodko.

"It was said that for the Russian side this was absolutely unacceptable," Prikhodko told journalists after Bush and Medvedev met on the sidelines of the Group of Eight summit in Japan.

It was their first meeting since Medvedev became president.

Despite the differences between the new Russian leader and the outgoing US leader on the thorny missile shield issue, the two sides agreed to keep talking.

"Although there is no real progress... we felt that the mood among the US team is to continue dialogue. We will watch how it works out," Prikhodko said.

A US official said last week that Washington it had reached a tentative pact with Poland on placing part of its controversial missile shield in the former communist country.

The United States wants to base 10 interceptor missiles in Poland and a radar facility in the neighbouring Czech Republic.

But Pentagon spokesman Geoff Morrell made it clear before the tentative deal with Warsaw was reached that Poland was not the only option the United States had to host the shield.

"There are several European nations that could host the (missile) interceptors and Lithuania is one of them," Morrell told reporters in Washington.

Medvedev also told Bush Russia will push for dialogue with Iran on its nuclear programme but expects reciprocal signals from Tehran, according to a Russian official.

"Russia will do everything to stimulate dialogue with Iran and expects corresponding signals from the leaders of Iran," Medvedev's diplomatic advisor Sergei Prikhodko told journalists.

Iran last Friday delivered its response to an EU package of incentives to halt the enrichment of uranium.

Iran's top nuclear negotiator Saeed Jalili has said his country submitted a "constructive and creative" response with "a focus on common ground," but he did not elaborate on the contents.

Just a day later, Tehran offered to negotiate on its nuclear drive but without giving up uranium enrichment.

The United States has said it would consult with its allies before commenting on Iran's response.