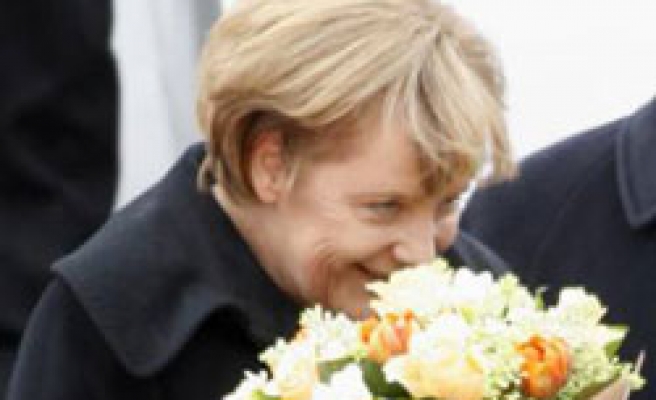 German Chancellor Angela Merkel became the first foreign leader to fly to Moscow for talks on Saturday with Russia's next president Dmitry Medvedev, and was expected to voice concern about the fairness of the vote he won.

Merkel, the first foreign leader to visit since Medvedev was elected to succeed Vladimir Putin, will also assess the prospects for any shift in policy under the incoming head of state, who will be sworn in as president in May.

"The leaders will discuss Russian-German relations with the accent on ensuring the continuity and future development of ties," an unidentified senior Kremlin official was quoted as saying by Itar-Tass news agency.

The German leader is also expected to talk frankly about an election that observers and opposition groups have criticised as unfair. Putin says the election was held in strict accordance with the Russian constitution.

"The chancellor will surely raise...the conduct of the election, which we view critically," spokesman Ulrich Wilhelm said.

The relationship between Medvedev and Merkel, a physicist from the former East Germany who speaks Russian, is likely to play a key role in relations between the two countries and with the European Union.

Merkel, who has in the past scolded Putin over human rights, has also sought to boost trade with Russia's booming economy and to mediate between Moscow, Washington and Russia's EU partners.

Germany is by far Russia's biggest single trading partner, with a record $52.8 billion in bilateral trade in 2007. German firms put $3.4 billion into Russia last year and have key investments in Russia's energy sector.

There is hope in Berlin that Medvedev's election may herald a shift towards a more constructive Russia after clashes with Putin over Kosovo's independence and U.S. plans to put a missile shield in central Europe.

"There's hope the new start will mean a move away from some of the tough tones, which might have been due to election campaigning," Gernot Erler, Germany's deputy foreign minister, told Reuters in an interview this week.

Merkel has been more critical of Putin's Russia than her predecessor Gerhard Schroeder, but is keenly aware of Germany's dependence on Russian energy and Moscow's key role in international disputes like Iran.
Last Mod: 09 Mart 2008, 10:41
Add Comment