Merkel: No deal on EU treaty yet

EU leaders who met in Brussels in a key summit to discuss the road map for the EU treaty have yet to reach agreement, said German Chancellor Angela Merkel. 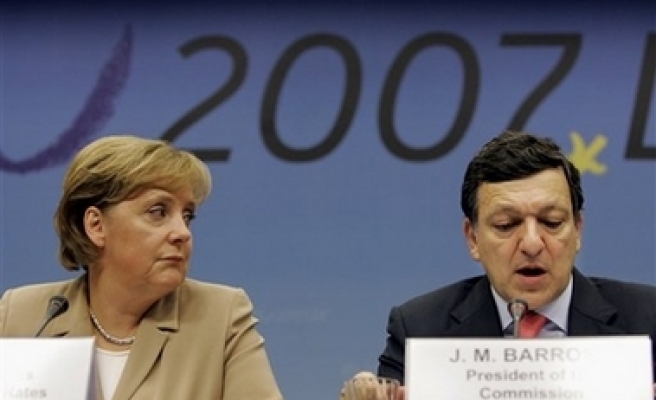 EU leaders who met in Brussels in a key summit to discuss the road map for the EU treaty have yet to reach agreement, said German Chancellor Angela Merkel.

"There are no results ... and the leaders have to further talks," Merkel, whose country holds the rotating EU presidency, told reporters after meeting with other EU leaders earlier in the day.

"The atmosphere was good," she added.

Jose Manuel Barosso, President of the European Commission, urged all EU members to "show solidarity and commitment" so that the 27-nation bloc can have "a capacity to act."

The negotiations were "tough," he said.

Poland, Britain, the Czech Republic and the Netherlands have voiced their demands for changes to the road map for the EU treaty designed to streamline the EU decision making.

Poland, in particular, has been under mounting pressure to soften its stance on the voting system.

Poland is firm in its opposition to the "double majority" voting scheme envisaged in the EU constitution, fearing that populous countries like Germany would dominate decision making in the union.

The "double majority" voting system provides for decision-making by at least 55 percent of the number of member states and at the same time 65 percent of EU's total population at the expense of national vetoes.

Poland has threatened to derail the new treaty process and proposed a new voting scheme instead -- a nation's votes would equal the square root of its population.

The EU summit, which will continue through Friday, opened here Thursday afternoon. Later, the EU leaders endorsed the plans for Malta and Cyprus to join the euro zone on Jan. 1, 2008.

The two-day summit are expected to be dominated by negotiations on the road map for a new EU treaty, the Western Balkans, EU relations with Africa, and EU relations with Brazil. Last Mod: 22 Haziran 2007, 12:47
Add Comment