China's leaders should regard the Olympic Games as an opportunity to address their "fear" of dialogue, German Chancellor Angela Merkel said. 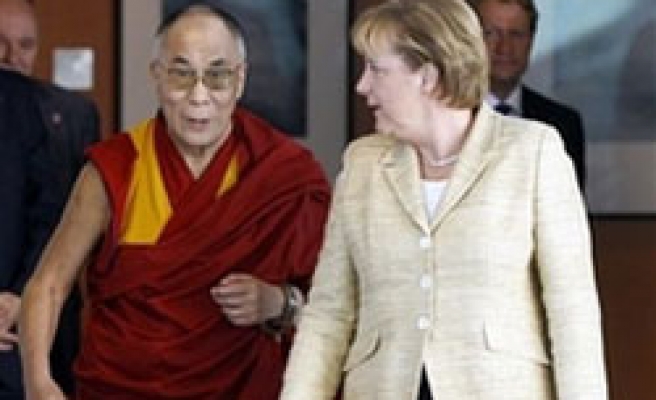 China's leaders should regard the Olympic Games as an opportunity to address their "fear" of dialogue, German Chancellor Angela Merkel said.

"I hope the Olympic Games in China become a Games of dialogue, and that China overcomes its fear of this. This is emphatically the case for the conflict over Tibet," Merkel told the Frankfurter Allgemeine Sonntagszeitung paper.

Merkel angered Beijing when she welcomed the exiled spiritual leader of Tibet, the Dalai Lama, in Berlin last year. She will not meet him on his planned visit to Germany in May.

"I'll be in Latin America taking part in the EU-Latin America summit," she told the paper in an interview published on Saturday. "But I'll certainly meet the Dalai Lama again at a later date."

The meeting last year caused a chill in relations between Beijing and Germany, China's biggest trading partner in Europe.

Merkel has said she will not attend the opening ceremony of the Beijing Olympics, which have been dogged by protests about China's treatment of predominantly Buddhist Tibet.

However, she said a boycott of the games would not help Tibetans. The event ought to be regarded as an opportunity for Germany to speak to those in power in Beijing.

"One aim of these talks is to set in motion a dialogue between the Beijing government and the Dalai Lama," she said.

The Dalai Lama has rejected Chinese allegations he orchestrated rioting in Tibet's regional capital Lhasa on March 14 and subsequent protests across Tibetan areas.

Her reception of the exiled leader last year and China's treatment of him were "two different things," Merkel said.

"But both lead us to how we deal with the upholding or the abuse of human rights, and Germany's attitude here is clear-cut, and receiving the Dalai Lama is a part of this," she said.

In her weekly Internet podcast, Merkel said she would address the Council of Europe on human rights next week.

Without mentioning any country by name, she said dialogue was the best way of helping the oppressed.

"We know human rights are being still being abused in many parts of the world," she said. "And we think we can improve them worldwide through dialogue and by setting a good example."

By pressing China, Russia, and Zimbabwe on rights issues, Merkel has departed from the more pragmatic, tread-softly approach that has been the hallmark of post-war German policy, from Konrad Adenauer to Gerhard Schroeder.

It has also lead to splits within the ruling coalition of her conservatives and the Social Democrats on how to deal with China, and whether it was right to receive the Dalai Lama.

Norbert Lammert, speaker of the Bundestag lower house of parliament, is due to meet the Dalai Lama in May.

However, China is trying to thwart the meeting, according to weekly magazine Der Spiegel. It said Lammert had been put under such pressure by Beijing to call it off that he had written a "strongly worded" letter of protest to the Chinese embassy.