An imam discussed his Muslim faith Sunday at the Reno First United Methodist Church and has invited the Christians to Friday's service at the mosque in Sparks. 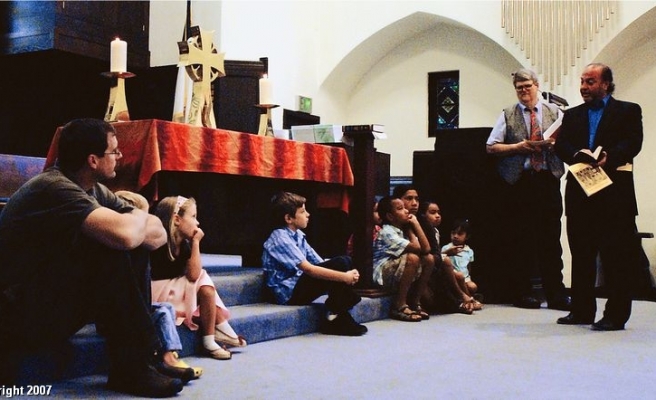 Muslims and Methodists are mingling in Reno, USA.

An imam discussed his Muslim faith Sunday at the Reno First United Methodist Church and has invited the Christians to Friday's 1 p.m. service at the mosque in Sparks.

The First United Methodist Church has been reviewing a PBS television show on the Muslim faith for its adult education class and capped it with a visit by Abdul Barghouti from the Northern Nevada Muslim Community attending Sunday services.

Barghouti spoke to the congregation at the 8 a.m. service, gave a history of Islam at the 9 a.m. adult education class and then spoke to a group of children gathered at the front of the church during the 10 a.m. service.

During the adult education class, Barghouti described how Islam has a shared heritage with Judaism and Christianity, including a reverence for Jerusalem. He called Islam a religion of peace, "in spite of a few idiots who try to give us a bad name."

"I hope this is only the beginning of our dialog and building a community together," said First United Methodist Pastor John Auer.

After the adult education class, Patti Bengtson of Reno said she hopes it does not end there.

Diego Martin of Sparks called it a positive step as well.

"I think it's like all the other things we've been working with civil rights. It's the need to reduce stereotypes," Martin said.

The five daily prayers required of Muslims shows a dedication to faith, he said.

"I need to bring myself to do five prayers daily," Martin said. "I won't change my faith, but I will pray to the god I know."